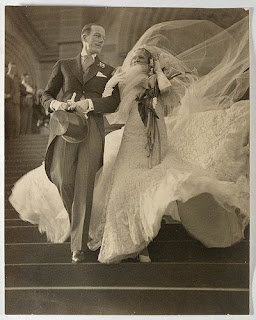 There are many important things to plan for a wedding. Location, date, menu, decorations, honeymoon, the list goes on forever. There is one essential part of the wedding that I know will take the better part of the next year to plan, at least for me. I only have a year to figure out what music I want to play during the reception, and that seems like barely enough time.

If you’ve read other posts on here, it should be obvious that I’m a little obsessive when it comes to music. It’s one of the few hobbies of mine that hasn’t diminished over time. Nicole is also a music lover, though not quite devoted to the weird and obscure as I am. We are already formulating our lists, and over the next months I’ll be recounting some of my potential picks. I pity the DJ that will have to follow my stringent demands, if I even bother with one in the first place.
As a side note, there will be no playing of the Funky Chicken song at my wedding. I plan to bribe my own DJ to make sure it doesn’t happen. The only chicken appearing will be on the dinner menu. I’m also not particularly keen on electric slides, though Nicole may veto me on that matter.

"I Want You to Want Me"- Cheap Trick
For how little Nicole and I’s music preferences cross paths, this is one of the few times where we agree on something wholeheartedly. Cheap Trick Live at Bukodan is one album we can both agree upon, and “I Want You to Want Me” is a classic track. I technically prefer “Surrender,” but that’s not exactly wedding material. Anyway, “Want Me” is fun, fast, and rocking, which I’m sure we’ll need more like it, since both our choices tend toward the slower tempos.

"Foxglove"- Murder By Death
I reviewed the album this song is from last week. It’s probably tied for my favorite song from the album, as it’s just a beautiful song that sounds so familiar you’d swear it is a cover. The lyrics are sweet, about a long search for a lover, and the cello driven instrumentation is just different enough to set it apart from other songs, without sticking out like a sore thumb. I’m trying to make the music flow without sounding all the same, which is going to be a difficult task. This track is going to be a centerpiece of that goal. Also, I can’t resist playing a song by a band called “Murder By Death” at a wedding reception.

"Love You Madly"- Cake
It’s a Cake song, which means it’s bouncy, funky-for-white-boys, horn and guitar driven, with somewhat ironic lyrics. Pretty much a song about wanting to love and not worrying about the details, and in Cake’s case make love too most likely. It’s a fun song with some odd references (“All the dishes rattle in the cupboards when the elephants arrive”?). It was also the opening credits song of the movie Forgetting Sarah Marshall, which was one of the first films Nicole and I watched together, even if she doesn’t remember this song being in it.

"If She Wants Me"- Belle & Sebastian
Belle & Sebastian is just one of my favorite groups that I have to include somehow. They’ve written a lot of wordy, sometimes sarcastic songs about love, but this is probably one of my favorites because it resonates so well with me. It sounds like a gentle 60s pop song, even though it was released in the last decade. The lyrics are wonderful, about a young man thinking the purpose of life is to do something profound before you die, then realizing he’d rather just hang out with someone he loves. In my case, that person is Nicole, of course.

"Young Folks"- Peter Bjorn and John
Another of the few songs Nicole and I can agree upon, this song is also known as the song with too much whistling for its own good. It’s also another driving, indie pop song, with an almost hip-hop backbeat, and of course the memorable whistling hook. The whole song sounds almost distant and melancholy, but it’s another that features lyrics about finding love and not caring about the rest of the world.

That’s five of the songs, at least, though I’m not even sure all of these will make the cut. I’ve got a lot of time to change my mind, and I’ve already completely altered the theme at least once. I clung to the all Sinatra style music idea for a lot longer than I should have, I think. Anyway, there will be a lot more of these to come as I continue to plan the greatest wedding reception ever.

Greatest determined by my own off-kilter parameters.
And nobody else's.
Except Nicole’s.
Obviously.
Lest she beat me with a table centerpiece.