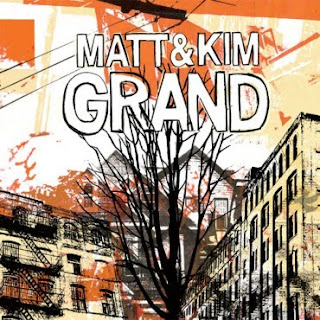 Album: Grand
Artist: Matt & Kim
Label: Fader Label
Sounds Like: Someone took the White Stripes, taught Meg White how to drum, gave Jack White an electric keyboard instead of a guitar, and took away about 3/4th the melody and the blues influence.

Matt & Kim are an extraordinarily simple band, so this is going to be a short and simple review. Hailing from New York, everything about the band seems to evoke the idealistic view of the place, with art school origins, album artwork built from collages of the city, and live shows where the two-piece loses itself literally in the middle of the audience. “Constructive Chaos” might be the best way to describe the band, as they seem to put a lot of effort into seeming random and destructive.


Matt & Kim are a two-piece dance rock band featuring drums and keyboard. You never miss the guitars, however, as the massive layers of lo-fi sound manage to sound louder than most modern rock bands. Their songs are chaotic, fast, and loud, but surprisingly danceable at times, with some hip-hop worthy beats.

The album is 10 songs long, with an added remix, but it passes in a flurry of sound that seems to be over before it begun. Part of the reason for this is that the songs are not very distinctive. While all of them are enjoyable, few moments really standout or provide a real memorable hook. The song “Daylight” received the most attention and some use in commercials, but other than a slightly catchier drumbeat, it’s not that recognizable compared to any other track.

Which isn’t to say the album is bad. The enthusiastic recklessness recorded here is pretty infectious, and definitely brightens your day if you enjoy the resounding noise on display. Next month Matt & Kim release their next album, Sidewalks, and hopefully that disc manages to develop some distinct songs amid all the wonderful mess. Until then, Grand is definitely worth a listen.

Conclusion:
NSP rocks to it, even if we prefer our keyboard playing a little more melodious.

Posted by Pajama Penguin at 8:41 AM