The Absence of the Other Half 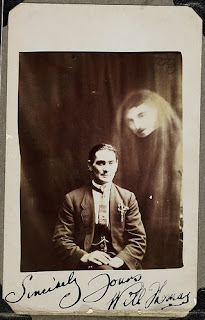 Nicole is not a spirit helping me solve mysteries, because she is, in fact, alive.
Photo from The Commons on Flickr.


Lately I’ve suffered not seeing my better half often enough. Due to Nicole’s work schedule and vastly different sleep schedule, I managed to see her a grand total of 10 hours, non-consecutive, including falling asleep, in the last 3 days. Yes, I did the math, because I’m that intensely bored without someone else in the apartment. If it wasn’t for Team Fortress 2 and random music, I’d be tugging my hair out at the roots, and the former is only possible when our intolerable internet works. As anyone can tell, however, she’s not only absent often in my life, but also on this blog.


For those just joining us, the original intent of this blog was for my fiance, Nicole, and I to write about our upcoming move to Florida. After a couple of posts, Nicole’s input has mysteriously disappeared. This might make some people wonder why the blog is still entitled “Nicole and Gabe’s Great Escape,” or theorize that Nicole is not in fact a real person, but the imaginary construction of some lonely computer geek dwelling in his parent’s basement. At least, you might be theorizing that now that I’ve brought up the idea.

There are some possible explanations for her absence. She might have been abducted by aliens, and returned to Earth knowing only some unknown, intergalactic language. She could be an international thief, on the run after a heist gone wrong and unable to blog for fear of capture. Nicole might have also transcended human form and become a being of pure energy, who is unfortunately inhibited in no longer having fleshy fingers for typing.

Truth is stranger than fiction, however. Except in this case, where the truth is extremely benign. The aforementioned work schedule gives Nicole limited free time, much of which she spends with me when not trying to bring order to our messy lives. She also claims she doesn’t have anything she wishes to write, which is only partially true. There are lots of things she wishes to write, but since most of them are “I hate my current job with a fiery passion,” she’d rather restrict them to her personal blog (which is very personal, so I won’t give out the link until she assures me I won’t be beaten with a frozen turkey for posting it).

Why am I keeping the blog name, then? Because much of what I’m writing about in this blog, including the wedding, the move, and our adventures, is still our “Great Escape,” not just mine. If the music writing ever overwhelms things, I might finally switch to “Nixon Segretti Productions,” but that’s not going to happen any time soon. For one, I’d have to re-design the logo. I like my carousel, thank you very much.

Email ThisBlogThis!Share to TwitterShare to FacebookShare to Pinterest
Labels: Personal