Of Proposals and Penguins 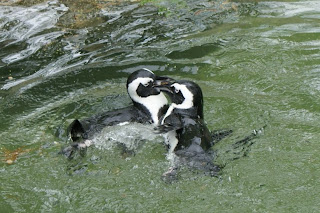 The big news in Nicole and I’s life is that on Friday, July 30th, I asked for Nicole’s hand in marriage. It was our year and a half anniversary, and everything worked out perfectly. Which is wonderful, since this event has been six months in the making, and I was just a little bit nervous.

I should really say eight or nine months, to be more still not precise. At that point, we began planning our one year dating anniversary. I decided we should visit Disney World together, as both of us have the right child at heart attitude. I also hadn’t been for four years or so, which is too long in my estimation.
As we continued to plan, I started to wonder if it was the time to ask that essential question. We had talked about marriage, and being together forever, and such things many times, so it seemed the natural thing to do. I also had everyone under the sun that knew about our trip implying that we would come back engaged. I started to feel I had to do it.

Nicole helped shelve all those thoughts. Every time she mentioned people expecting engagement, it was in an air of annoyance and frustration. I essentially got the message that if I decided to ask the question, I might be thrown to the Pirates of the Caribbean or chucked off Big Thunder Mountain. (Of course, she might come in after me and write about how she expected me to ask, so who knows.)

Thus, I decided to wait until the time felt right. As the months continued, references to engagement, marriage, and general life together increased. We discussed our impending move together. Nicole started sending me links to engagement rings she liked online. I was blind and heading for a ditch if I couldn’t read the signs.

I waited and waited for the perfect opportunity, like another great trip, and none came. Our work schedules never gave us much free time together, and soon we’d be busy planning our Indiana escape. So, I ordered the ring and decided I would wing it. “Wing it” eventually being an apt term.

After that choice, it all worked out. The same week the ring arrived, Nicole had Friday off from work. The same day as our year and a half anniversary. As well, I knew that the week was not going to be a busy one at work, and I could easily escape. All that was left was deciding the location. I thought of all my plans, then realized that a trip to the zoo would be the perfect place and cover.

Where in the zoo was an easy question to answer. Our relaltionship started when Nicole asked me about my penguin shower curtain. Penguins have had a place through every stage of our relationship. It seemed only natural to propose by the penguins.

The day of the proposal, I was terrified to discover that the zoo was packed with school groups and parents taking the day off to be with their kids. Thankfully, Nicole requested we tackle the zoo in reverse order, which meant the penguins would come much earlier than usual. As we approached the exhibit, we noticed some of the flightless birds we spring waddling around, pecking at insects and falling over in their haste. It was adorable, and the perfect distraction.

I got down on my knee to open up my camera bag, under the pretense I wanted to take a picture. Inside, I “discovered” one of our penguin stuffed animals, a small pink one. As I questioned what it was doing there, I handed it to Nicole as she noticed the ring around the toy’s wing. I really had decided to "wing it." I removed the ring and didn’t even need to ask the question, as she was pretty much speechless as we put the ring on her finger. We embraced, watched the penguins a little more, then walked along.

Really, the event itself was kind of a blur, as I was just trying to not think of all the people watching. Apparently they were, as we received at least a couple congratulations as we wound our way through the next few exhibits. At that point I didn’t care that I’d made a scene. I was engaged to the girl I love, and we were another step along our way to escaping together.