NSP Review: John Mellencamp- No Better Than This 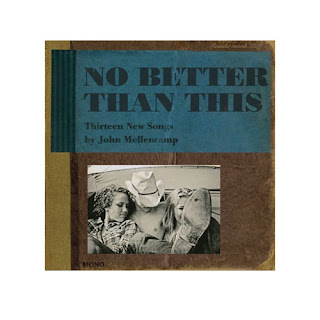 I have an interesting history when it comes to John Mellencamp’s music. As a child, I liked it along with everything else I absorbed, not really having the facility to distinguish good, bad, or mediocre. All I heard was music, there was no divide between country and rock, and I had no clue why people found AC/DC offense or why Achey Breaky Heart was ridiculous. When I reached my high school and college years, I developed a pretentious loathing for my home state, and since Mellencamp is a product of Indiana, he received that hatred as well. You should have heard me howl when he was inducted into the Rock and Roll Hall of Fame.

Since graduation, however, I’ve matured in my opinions, and somehow wrapped back around to loving John Mellencamp. Partly its because his music is just plain good and enjoyable listening, without pretension. He’s also an artist that does what he wants and doesn’t care about image, changing his name back from his rock star moniker of “Cougar” and stopping politicians who misuse his music. Integrity is the best way to describe it, something a lot of artists lack these days.


Mellencamp’s latest album is no exception to the rule. Called “No Better Than This,” the definitely sounds like another standard rock record. However, it’s far from standard, unless it’s the standards of 50 or 60 years ago. Mellencamp took a few musicians, old’timey infatuated producer T Bone Burnett, one microphone and antiquated recording equipment, and recorded an entire album on the run. He chose to record in Sun Studio, the First African Baptist Church in Savannah, GA, and in Room 414 of the Gunter Hotel, where Robert Johnson recorded.

The entire process sounds like a massive gimmick to trick people into accepting a mediocre effort as a revelatory experience. However, it seems more like a chance for Mellencamp to record songs far removed from modern concerns that are still original and timely, without the influence of modern recording tech and major label expectations. (The release is on Rounder Records, a wonderful root music record label.)

From the first to the last track, everything sounds warm and earthy, in stark contrast to the cold precision of most current songs’ protools production. Some of the songs are earnest and hopeful, like "Save Some Time to Dream," a song about not wasting life that manages to avoid sounding cliche. Other tracks are plaintive or downright sinister, like the Robert Johnson inspired "Right Behind Me," featuring a fiddle and a tail of the Devil’s influence.

This record sounds nothing like the rockstar that Mellencamp has reluctantly been for the last few decades. Instead, it sounds more like a long lost album from Bob Dylan or Tom Waits, that just happens to feature a better voice than either of those men possess (No offense to Tom or Bob). Easter Eve in particular seems like its from Dylan’s songbook, a long tale about a man and his son getting into a drunken brawl on the night before "Easter Sunday." Most of the album is quiet and contemplative, but a few tracks even manage to recall the rockabilly greats that also recorded at Sun Studio.

While the album may not have any high charting singles, it’s still a spectacular piece of work. John Mellencamp has provided more evidence that you don’t need modern equipment to make a great album, and that an Indiana boy can make classic music with the best of them.
--------Nixon Segretti Productions
Posted by Pajama Penguin at 11:12 AM