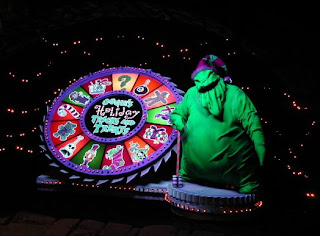 Picture from Garner Holt's website (The builder of this Oogie Boogie animatronic).

The internet was made for people that like getting lost down rabbit holes. Today I started my groggy morning by reading the regular Monday update of Miceage, a Disney Parks discussion board and news site, with emphasis on Disneyland. Monday is dedicated to construction and renovation updates around Disneyland and California Adventure. Greeting me in this update was the following photo (originally found on a twitter account called "MurphyTracker"): 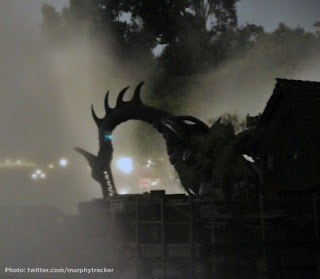 Apparently, the humongous animatronic dragon, nicknamed “Murphy” for Murphy’s Law, that ends the Fantasmic nighttime show, crashed forward and broke part of its lift or base mechanism. This ended the shows early for the night, and cuts out a, ahem, large part of the experience until it is fixed. As internet message boards tend to do, discussion on the subject has devolved into blaming everything under the Sun except the Sun itself (because it was night), with one of the accused being Garner Holt.

This then led me down to my current path, which is examining all the amazing work this company is doing. I’ve always been fascinated and in love with animated attractions, and I find animatronics fascinating in every way. It’s an under appreciated art form, like combining sculpting, painting, animation, sound design, and interior design all in to one constantly moving whole. My favorite rides will always be dark ride, and I even enjoy watching all the videos available online of the attractions I’ll never get to experience.

Something that I didn’t realize until today is that Disney does not produce many of its own animatronics still. This isn’t entirely surprising. Animated figures were an amazing new development when they were still Audio Animatronics, literally controlled by a series of sounds that told the figure when and where to move. With current technology, computer control of everything makes the base science behind the figures relatively commonplace, which allows new companies to excel in the artistry side of things.

Garner Holt is one of those companies, one that was previously unknown to me. I was aware of other groups, such as Sally Corp, which build many of the interactive dark rides popular in more standard amusement and theme parks:


Garner, however, works for the best of the best, and there work shows it. I personally love the Oogie Boogie figure from Haunted Mansion Holiday, the Nightmare Before Christmas themed seasonal overlay of the Haunted Mansion. The figure is fluid, dynamic, and brings to life the odd villain made of burlap and bugs.


Some people bemoan the fact that animatronics aren’t exclusively created by Disney. In contrast, I’m quite glad that we’ve reached a place in technology where any theme park, store, restaurant, or whatever place can find a way to make there establishment that extra bit magical. I think life can only be better if there’s a little fantasy and wonder to be found right around the corner. I’d love to have an animatronic friend just around the corner (which is part of the reason Nicole and I are moving to Florida).

That’s where my rabbit hole took me today so far. Where will yours take you?