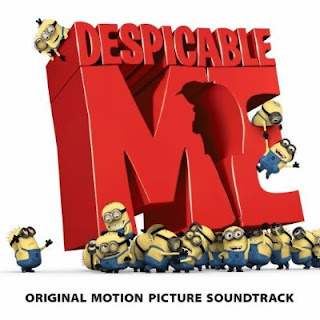 This year in movies has been pretty good for me so far. How to Train Your Dragon, Toy Story 3, Scott Pilgrim Vs. The World, and Despicable Me have all been winners, hitting both themes of maturity and complete silliness and oddity. Despicable Me is one of the biggest surprises, as I expected some Shrek-like reference fest with lots of scatological humor. Instead, I found a film that combined the emotion and heart of the Pixar films with the absurd physical humor of classic Looney Tunes, and somehow made it work beautifully. Plus, it featured the protagonist, Gru, punching a shark in the face, which is always a good time.

The soundtrack of the movie also tries to blend a party atmosphere with sweeter moments, and doesn’t manage to succeed quite as well. Part of the problem is that it’s a short album. There are only 10 tracks total, 2 of which are classic disco tunes “Boogies Fever” by The Sylvers and “You Should Be Dancing” by the Bee Gees.


The rest of the songs are a mixed bag. Pharrell produced much of the original music, and most of his tracks are standouts. “Despicable Me” is a fitting theme song for Gru, recounting his villainous-yet-not-evil antics from his point of view. Some have complained about the use of autotune in the song, but in this case it gives the choruses an air of frustrated emotionlessness, while a children’s choir makes the chorus sound decidedly menacing. “Fun, Fun, Fun” and “Prettiest Girls” are great, enthusiastic R&B songs that the entire family can enjoy, cheery and sunny without being annoying. “Rocket’s Theme” is a ballad that is sweet and hopeful for the first 2 minutes or so, but continues on for another 2 minutes after it should finish.

Robin Thicke contributes the song “My Life,” which is in the same vein of energetic R&B that makes for great listening, if not completely appropriate for the movie. “I’m On a Roll” by Destinee & Paris, on the other hand, seems like just another vapid dance pop song like a hundred others on the radio, and seems to be included just to pad the length of the cd.

The two remaining tracks are attempts to give the characters their own songs. “Agnes’s Song” is an attempt to take a one line children’s song and turn it into a 2 minute track. After the first 30 seconds, you have a distinct desire to punch a unicorn in the face, and the song doesn’t improve, or really even change at all, from there. “Minion Mambo,” on the other hand, is a surprisingly great song, with a chorus of Minions (the cute mascots of Despicable Me) excitedly chanting “We Work for Gru” as Lupe Fiasco raps in the high pitched minion voice. The only downfall of the song is that it doesn’t use the nonsensical, giggle inducing minion language, but still, it’s a cute song that perfectly depicts the minions’ mindless enthusiasm for their work.

Overall, the Despicable Me Soundtrack is probably not worth a full ten dollar purchase. Instead, I’d suggest downloading the Pharrel songs and “Minion Mambo” from iTunes (or your chosen legal downloading service), and mambo like a minion through the rest of your day.