Gabe Vs. The Insects 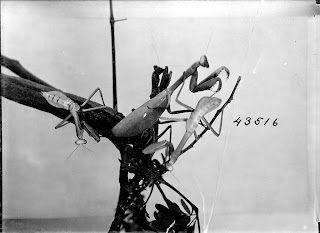 One of the many creatures I'm actually not bothered by. I just didn't want to look at the ones that do bother me.
Photo from The Commons on Flickr.


I am not a fearless person, as I’ve established before. This is especially true when it comes to tornado spawning thunderstorms, needles, and various insects of a certain disturbing ilk. Unfortunately, something of these exact creatures are numerous in Florida, and I’m having to face the possibility I may have to face them one on one.

I find 99% of living things some level of cute, even ones that I wouldn’t hug with a 10 foot pole. I’m not sure how I’d hug something with a 10 foot pole, but I’m sure I’d fine a way. There’s a spider that lives on my car I consider a surrogate pet almost, and I find the Komodo Dragon at the zoo adorable. I’m pretty sure he finds that I look like a 5 course meal.


There are a few crawling, filthy creations of the Devil that I would much rather see wiped out in some glorious fashion. The three leaders on this list are the earwig, the silverfish, and the infamous cockroach.

There are multiple origins for my hatred of earwigs. Of course, there’s the infamous Night Gallery episode where an earwig is used as a lethal brain-eating weapon, which turns on the villain and lays eggs in his brain. This is complete fiction, as earwigs are more interested in your leaky sink than your ear canal, but it is one of those things that you see as a kid and have stick with you for ages.

The childhood fear only grew when they began to infest my bedroom yearly. As now, I was never exactly an uncluttered individual, and earwigs nesting under our deck found the underparts of my bed and closet the perfect dwelling place. Thus, I would spend months at a time turning over random piles of clothes or sheets, only to find a bunch of weird, crawling shapes go running in every direction. Those weird pincers on the back always creeped me out the most, making me shudder every time I spotted one fleeing.

Silverfish I’ve only experienced a few times, rare occurrences that I don’t want to repeat. All I remember was a tangle of legs and antennae and parts that had me questioning just what I was witnessing. Of course, this was college, so sleep deprivation may have had me freaking out slightly more than was necessary. Still, I found myself extra carefully moving the dishes in the campus coffee houses’s sink for the next few months, in perpetual fear of uncovering another one of these monstrosities.

The cockroach needs no real introduction. Other than one epic morning where I dodged one for a few hours as I tore down a vendor booth for work, I’ve never had too much interaction with them outside of zoos. However, they freak me out to a level of near break down. I will not get near the things, and I think that people that have them as pets have to have at least fifty screws loose (apologies to all those cockroach lovers out there, all 8 of you freaks).

I don’t know about earwigs, but I do know that cockroaches and silverfish are ubiquitous. Reading apartment reviews with Nicole, I see numerous complaints about the little mutants, with responses essentially saying “Well, they’re a fact of life down here.” I know it’s a silly reason to be worried, and I also know that I’m going to encounter something like that wherever I move. Still, I have this horrible feeling that those disgusting creatures are just biding their time, waiting for my arrival and for the terrorizing to begin.

(Random Note: While watching my Grandmother for a few hours and being exhausted, I... “embellished” Nicole and I’s grocery shopping list for later that evening. I added weird rhymes and puns to almost every item, and she insinuated, then flat out stated, that I was going to write an entire blog post about it. I’m proud to say I didn’t, so I would just like to state for the record, “Na, na na, na na, naaaa”)