The Art of Screaming Seagulls- A Winona Lake Evening Yesterday, Nicole and I made one of our ventures off to nearby Winona Lake. This may seem odd, since we currently live in an apartment across the street from a lake. The big difference is that while our lake is packed with houses and has no real beach to speak of, Winona Lake has a nice beach, a canal filled with turtles and fish to watch, and an entire artist’s colony known as the Village at Winona. As mentioned before, it’s one of the few places I’ll truly miss when we move to Florida. The Village at Winona has a whole collection of random stores and restaurants packed into a few blocks. There's a barber (who happened to be on vacation, apparently). An ice cream parlor called Kelainey's, which is actually one of several in the town. Beware of the sundaes, which violate the rule of not eating anything bigger than your head. Also a few restaurants, including Cerulean, which features sushi. This is good, because it's one of the few places in town that even know what sushi is other than "ewww, raw fish," but also bad, because Nicole really doesn't like fish unless it's in the form of tuna in a can. The focus of the area is the artists, however. There are a range of galleries which seem to change occupants and owners very regularly. Styles range from photographers, to more classical painters, to sculpture artists. Recently, more abstract and pop artwork has started to move in thanks to the efforts of one of my relatives and his fellow conspirators. 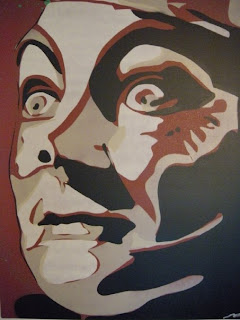 We interrupt this blog for this public service announcement from Nixon Segretti Productions: You know the importance of pop and post-modern art in your daily life. Without a dose of Warholian weirdness or Banksy-ian anarchy, you may find yourself feeling sleepy, groggy, connected too much with reality, and experiencing brief periods of sanity. Try starting your day with Jason Rowland brand art! The playful, sometimes twisted works of my cousin's husband will make sure your brain is on the right wavelength, two left turns from normality. Visit his website at http://imafraidofbeetles.com/, or his Etsy account at http://www.etsy.com/shop/rowland1964. 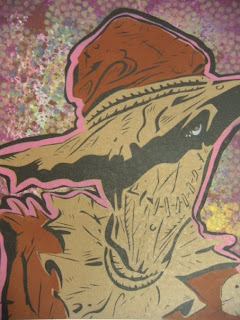 We now return you to your regularly scheduled blog entry. As featured at the top of the page, the canal at Winona features a wide variety of boats of all shapes, sizes, colors, and purposes. Thus, you get some odd combinations, like a rubber raft living next door to a wooden fishing boat. I bet there's a sitcom in that somewhere. Now this looks like pure bliss. There are several large corporations headquartered in Warsaw, and many of the higher pay bracket employees refuse to live in the immediate area, instead commuting from Fort Wayne or its surrounding communities. Many of those who stay near Warsaw live on Winona Lake. I am very jealous of these people. Such a shadowy and fowl picture. *Rimshot* These boats are liars! They are not buffalo, no matter how hard they try to trick you. Don't believe them for a second. The top boat claims its a Buffalo Canoe, but I neither saw a buffalo riding in it, or found any evidence it was made from buffalo. Again, liars! Nicole posed for this picture, looking thoroughly enthused. So, I turned it black and white. Give it an arty title and someone might think there's some deep meaning behind it all. Another photo of the lake leading into the canal, with my favorite great big bushy tree to the left, and some random ducks in the foreground. I just love this lake. Nicole chasing tiny fish in the water. A few minutes later I nearly tripped after both my flip flops were eaten by the sand along the shore. I think karma attacked the wrong person. A couple of butterflies doing... something. They refused to part from each other, as I chased them around trying to get a good picture. This is a very dignified duck, stoically floating along looking for sustenance.\ This is a very undignified duck, mooning the lake as he bobs for something slimy along the wall. Learn some decency, you fowl creature. *rimshot* Look, it's David Buoy! *rimshot* Thank you, thank you, I'll be here all week. The seagulls are not amused by my humor. They don't seem to be amused by much, really.

Nicole and I were discussing the seagulls not being amused about our interrupting their relaxation, and the screaming sound they thus made. She mentioned the "Scream of Seagulls." I determined that would be the perfect name for a metal tribute to Flock of Seagulls. Especially since this one decided to dive bomb us as we were standing on a nearby pier. Apparently it thought better of it, as it swerved at the last second. Nicole found this shell near the seagulls. It was filled with some black slime of unknown origin. She quickly put it down, and we did not speak of it again. Nicole sitting on a bench. I just love this photo, it just turned out really well. This plague was actually donated by one of the above mentioned grand poobahs living along the lake. It's actually pretty cool, if a be randomly placed. Is it a description of the boat, the boat's owners, or a tribute to the infamously awful Dan Akroyd movie. I pray it's not the latter, that movie scarred me as a child. Two dragonflies, also doing something unknown. Must have been something in the air that day. We end with a lovely little flower, just a tiny part of the pretty landscaping along the canal and around the area houses.

There's nothing particularly exciting about Winona Lake, no rides, games, or even a record store (which I still swear they need). There's just something intoxicating about a place so pleasant and peaceful, with an air of seclusion, that sits only a mile from the highway and the bustle of Warsaw.