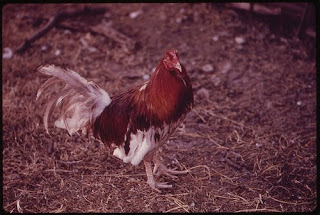 This is a real chicken, for representative purposes. Photo from The Commons on Flickr.

As I’ve mentioned, Nicole and I plan on making a trip to Florida in October to scope out our new habitat. I also want to spend a few days at Universal Studios while there. Unfortunately, this will be during their annual Halloween Horror Nights. This scares the crepe out of me.

I am a chicken. I do not find this a major fault. Yes, a coward may die a thousand times, but at least I live to die again and again. And really, it’s kind of cool to say you’ve died a thousand times. Sounds like something a Norwegian death metal singer would claim, right before a bandmate stabs him. Seriously, those guys are terrifying enough to be exhibit #1 why running and hiding is almost always the best plan of action.


Crazy Norwegians aside, normally I’m not that fearful. Somewhat overly cautious, maybe, and even a little superstitious about not jinxing myself by taunting the universal force of irony. Also known as, the one day I don’t wear a seat belt is the day somebody plows into the side of my car. However, when it comes to things marked clearly within the boundaries of “horror,” I am a small, whimpering child curled up in a ball in the corner. 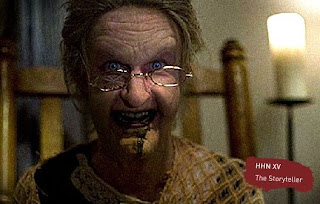 They even make story time with grandma a reason for therapy. Photo from the Halloween Horror Nights site.

It’s a longstanding phobia. My first trip ever to Disney World, I was throughly intimidated by the Haunted Mansion, and only opened my eyes twice during the entire ride. Years later, I went to a local haunted house for Halloween, and went hyperventilating out of the first chicken exit. It didn’t matter I could see the scare coming from a mile away, Dracula bursting from his coffin is still freaking intimidating.

The worst part of it all is that I really like the art of the horror attraction. It’s kind of like a twisted form of interior decorating, using blood and gore instead of paint and decorative vases. It takes true artistry and talent to make a cohesive environment like the ones Universal creates. I would love to tour the sets and examine all the details and costumes. 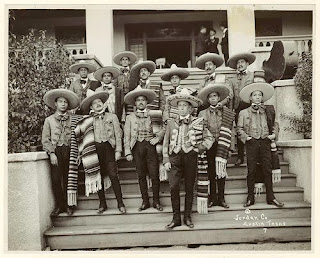 These men know no fear. It has to be the hat. Photo from The Commons on Flickr.

However, until I can guarantee I won’t be subjected to a bevy of cheap scares, I can’t bring myself to visit these places. Thus, I’ve devised a new way for chickens like me to experience these scary attractions without needing defibrillator. I call it the Fear Sombrero. Everyone who wants to be left alone by all scare actors, treated as if they don’t exist, wears the sombrero. Not only can the sombrero be seen from a mile away, there’s the natural jaunty positivity that comes with wearing such a fun hat. This way it both makes the wearer immune from any cheap scaring, and gives them a new confidence in their step.

Until I can effectively market my idea, I guess I will have to flee from the parks well before the monsters come out to play. I’ll just have to relax in the pool, with no bloody zombies screaming in my general vicinity.

I might even be wearing a sombrero. Just for fun.