For over 6 decades, Gatorland has existed outside the mainstream of Orlando tourism. Hidden on the outskirts of Orlando only recently touched by suburban development, it's a destination separated from the bigger attractions both by distance and ideology. Gatorland is a family owned attraction with an almost singular purpose, presenting visitors with an extreme concentration of some of the world's biggest reptiles. From the iconic giant jaws in front to the breeding swamps in the back, everything is devoted to alligators. 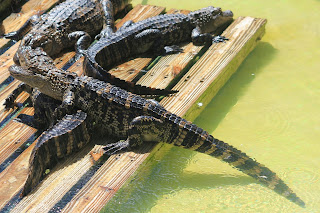 1. Location: Gatorland is located at 14501 S Orange Blossom Trail in Orlando, Florida. It's about 15 minutes from the edge of Disney property via the toll road, 20 to 25 minutes without it.

The price is a good deal compared to Disney or Universal, but admission only provides access to most areas of the park and the shows. Almost everything else requires an extra fee. There are special tours available that start at $10. A zip line experience costs $69.99. Photographs with a baby gator or wrestling a subdued reptile are also available with an extra charge. Even the train around the back of the park costs an extra $2 to ride. 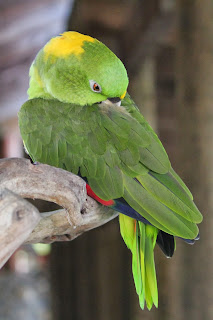 3. Park Layout and Features: Gatorland features an easily navigable layout that's mostly circular. At the front of the park are boardwalks overlooking gators in various stages of development. Bisecting the park are paths that include various special gators, such as the extremely rare white alligators, small reptiles and other animals, including an assortment of parrots. The back of the park includes a breeding marsh and exotic crocodiles and alligators, and there's also a walkway through mostly untouched Florida swampland.

4. The Shows: Other than the alligators themselves, the most famous part of Gatorland are the shows. These are unpretentious productions that do exactly what they describe. Simplest of all, the Gator Jumparoo Show features raw chicken being used to entice gators to jump out of the water. The Gator Wrestlin' Show features young men dressed like Florida "Crackers" (cowboys of Florida) wrestling medium sized gators and demonstrating gator anatomy. Finally, the Up Close Encounters show is a standard presentation of smaller animals. The shows are entertaining and presented in the spirit of the park, with plenty of lowbrow humor but also lots of information about the animals. 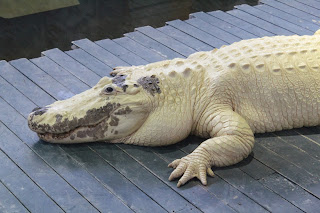 5. The Animals: Gatorland promises alligators, and it more than delivers. There are alligators of every shape and size, from ones a foot long to monsters of over a 1000 pounds. The white gators are stunning highlights, sequestered in their own enclosures due to their violent temperaments. Other alligators are rescued "nuisance gators," so called for being intruders into residential neighborhoods throughout the South. If you're visiting Florida and want to see alligators without leaving Orlando, this is the best place to see them. SeaWorld features some small specimens, but nothing that compares to the monstrosities on display here. You can also feed the alligators, but it's another extra charge.

6. Food: Gatorland features Pearl's Smokehouse, as well as a small snackbar. The smokehouse has a standard grill and barbecue menu, as well as gator nuggets. These nuggets are from farm raised alligators, not those starring at the park.

7. Conclusion: Gatorland is definitely not an attraction for everyone. Those that expect a modernized attraction or have little interest in wildlife will not be impressed. However, anyone that wants a sample of Florida tourism before the days of Disney or wishes to see alligators without leaving Orlando will find a lot to like. It's inexpensive without the extras and a great way to spend part of a day away from the marquee destinations.
Posted by Pajama Penguin at 2:26 PM