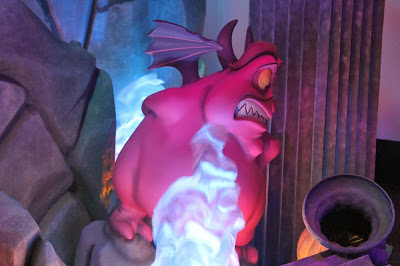 Note: If some of the photos from this article look familiar, it's probably because I'm a writer for VinylmationWorld.com. My series of articles reviewing the 13 Reflections of Evil Trading Event in a more straightforward manner can be viewed on that site. This is a more personal view of a unique spectacle.

Nothing will make you appreciate villainy more than the Florida interstate. After the third driver tailgates my vehicle or cuts me off, swear words begin to flow from under my breath without thought. I begin to curse those poor unfortunate souls, wish for friends on the other side, and feel a little bit of Cruella de Vil in my heart. I know the unrighteous fury that comes with being a Disney villain, and so I am now ready for the day's events.

On this particular Sunday morning, I'm on my way to the 13 Reflections of Evil Trading Event. This is Disney's annual showcase event for pins and Vinylmations, their two main collectibles that generate a steady income from a devoted fan base. The annual events are not some tribute to dedicated fans, however, but big business in themselves, with admission prices starting at $65 per person and lots of expensive merchandise for sale as well. Every year features a different theme, and Reflections of Evil is devoted to Disney's animated villains, a popular and lucrative part of the empire.

Savvy collectors are willing to pay the price because the events are a unique opportunity. The items given to all attendees sell online for as much as the price of admission or more, and some items for sale will only rise in value over the years. Not everyone comes for profit, of course, with many taking the chance to expand their collections with items only available once or year, or by expert trading with other dedicated fans. 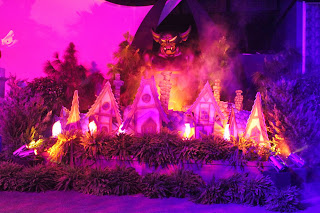 I have a duel purpose of my own for attending the event. I am an obsessive collector at heart, and the random nature of blind boxed Vinylmation figures calls to a particularly addictive part of my psyche. However, I'm also attending to experience this unique exhibition to give an outsider's impressions. I've been writing about Vinylmation for nearly a year now, but I still feel outside most of the collecting community and its idiosyncrasies. This event is a chance to see the culmination of a year's worth of collecting activity, in the center of the kind of spectacle Disney makes a specialty.

Arriving at Epcot, I make my way swiftly to the front entrance. As swiftly as I can, at least, since I'm carrying three different bags filled with vinyl figures, boxes, and camera equipment. Staggering towards the security checkpoint, I'm asked if I'm here for the trading event. Answering in the affirmative, I excitedly anticipate some sort of special treatment.

The special treatment I receive is a special security check, where I leave all my opened bags on the ground as a trained police dog sniffs for suspicious objects. This routine makes sense to speed up checks when lots of Vinylmation traders are arriving, but when I'm alone, it feels conspicuous and a little embarrassing. Since I'm smuggling no weapons, drugs, or steaks, the dog passes by my bags without incident, and I get in line for park opening. 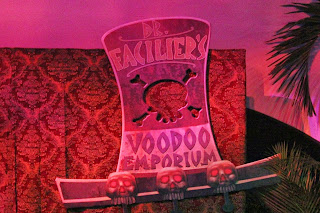 Once Epcot finishes its opening ceremony, I rush towards World Showcase, where the World ShowPlace Pavilion holds the Reflections of Evil event. I expect to be racing a crowd of Vinylmation fans, but find few people headed the same direction. I switch to a leisurely stroll, appreciating the quiet solitude as I pass World Showcase countries still preparing for their opening later in the day.

Unfortunately, I discover that other traders either have mystical powers of teleportation, or that they've mostly entered the park from the back. There's already a substantial line, and the event doesn't open to the general public for another half hour. Thankfully, I'm allowed to enter the building early to finish my registration, but am then sent back outside to wait in the sun. The event inside was already bustling, due to an early entry breakfast at a substantial extra charge, and I know that it's going to be chaos once this entire line enters the building. I ready myself, and wait. 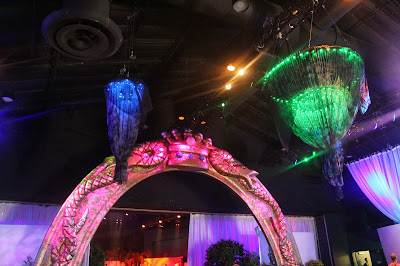 Soon, Cast Members open the gates and let everyone inside the pavilion. The sliding front doors fly open, letting out a blast of air conditioning and smoke machine fog. Stepping into the low event lighting, the eyes take a second to adjust before the details emerge. To the left is a set of glass cases filled with a constantly changing display of f uture Vinylmations. To the right is the registration area, overstaffed with employees attending to the few latecomers to the event. All of that is dwarfed by the giant, twisted arch in front, a menacing structure framing the entrance to the event floor.

Although the base structures of the pavilion stay the same between events, the decorations and theming on display are impressive. Green and purple lighting fills the hall, and oversized props dominate the view. Chernabog, the Satan-like demon from Fantasia, looms over an ever-burning village. Giant video screens play clips of villains' greatest moments in between event details. Classic villain songs play on a constant loop, which isn't annoying since they have the best songs from animated movies anyway. While I'm sure much of the display is created from recycled park items, I still find it slightly depressing that so much money, effort, and time has been spent on something that will exist for only 3 days. 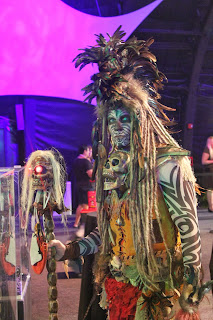 Throughout the day, contests and presentations take over the main stage, attempting to pry some attention away from the busy activity elsewhere. Overseeing and emceeing the festivities are a group of Cast Members dressed as unique villainous characters, from a voodoo priest to a witchy, murderous widower. The latter offers to make me her 13th husband, something I was glad to refuse since I'm thankfully already married.

These characters roam the hall between main stage events, providing some much needed respite from the long lines. One of the highlights of the Trading Events are Trading Activities, which allow attendees to trade in their extra Vinylmation figures for a chance at something better, including rare vinyls provided by Disney that are worth hundreds to thousands of dollars. Most of the activities are simply comprised of picking a random number or letter and receiving what item is hidden inside a giant box. Still, the chance at such amazing potential prizes leads to long lines of half an hour or more, even though there are around ten different stations available. 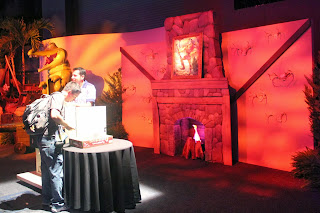 The problem grows worse when it's quickly realized that the games only receive new items every half an hour, meaning much of the crowd only receives the random junk leftover from those ahead in line. The game then becomes timing the lines so that you emerge just as the cases are switched for completely new ones. At that point, those lucky few at the front quickly develop cheat sheets and other devices to optimize their random picks, guaranteeing the best chance of receiving something amazing. Those in behind them in line only curse their luck, and wish for the return of games that include some level of skill.

I can't commiserate with comparisons to previous events, but I can understand the frustration. Time spent in lines is time spent away from the trading area, where busy attendees run between long tables trying to make exchanges in their favor. Even in the lines, trading deals are still developed between bored guests. I meet a lovely older man from England, who graciously trades an item only available in the Parisian Disney Parks for something that was never for sale outside of the United States. He's not the only attendee from another country, and I hear a large amount of accents during the day, including lots of visitors from the United Kingdom. 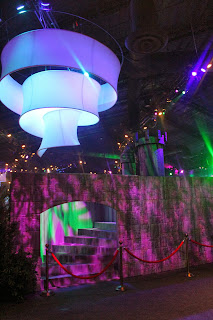 Being the last day of the event, much of the heavy trading has already been completed. My wife, who is the better trader of the two of us, isn't able to arrive until late into the day, which limits the trading pool even further. Still, she runs between the remaining collectors, some already packing up their Vinylmations in preparation for the journey home. She makes what deals she can and manages to find multiple items we want, and some things we didn't know we wanted, while giving the other traders some new treasures for their collections.

If it wasn't for her efforts, I don't believe that I would be taking much advantage of the trading part of this trading event. After spending hours all day on my feet, running between lines and photo sessions, carrying multiple bags at all times, my body begins to collapse. Cuts on my neck and arms have formed where the bags have dug into my skin, and I sink into my seat to relieve some of the strain on my back. My wife reports back periodically with her great finds, and I give her a wan smile. I want to get every cent of value out of the expensive event, but I also start counting down the minutes until the official end of the festivities. 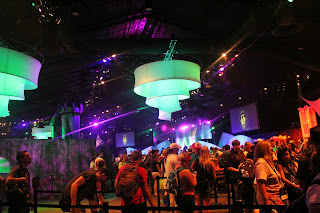 As the day ends, the emcees try to keep the crowd excited by asking form them to give an evil laugh. Only a faint few cackles are heard. They then ask if the crowd is tired, and a mighty roar greets them with an affirmative. To both veteran collectors and new attendees, the day has been exhausting. I'm not alone, at least. I've spent more money than is probably justifiable, and I've driven my body into a state that will take two days to return to normal.

At first, I'm not sure I want to subject myself to the event again. Yet a few days later, looking over my new Vinylmations and looking at the pictures, I realize I've experienced something that few get to see. I've been in the heart of Disney's collector community with the most dedicated of fans, and I've survived. I'll probably be back next year. At least next time, like Scar suggests, I'll be prepared.
Posted by Pajama Penguin at 6:34 AM