The Misanthrope's Guide to Pirates of the Caribbean 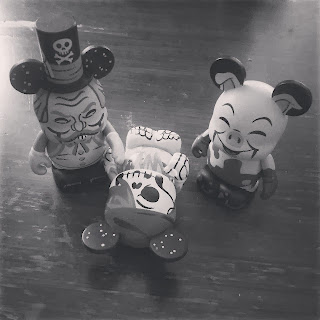 Pirates of the Caribbean is one of the marquee dark rides of any Disney Park, the kind of attraction that is timeless in its design. One of the last projects personally overseen by Walt Disney, it's a wonderful culmination of all the Imagineering skills, fusing impressive at the time technology with movie quality set design and an amazingly efficient ride system. It's the theme park equivalent of a master work, something that should be witnessed in person to take in its beauty. Unfortunately, that Pirates of the Caribbean is at Disneyland, and we're talking about Disney World.

When the Magic Kingdom opened, Pirates was notably missing from the available attractions. The logic was that since Floridians lived in a place once frequented by pirates, they would be bored by an attraction featuring them. This same logic was not applied when Disney designed a park in California about California a few decades later, but I digress. Visitors complained about the missing ride, so Disney cancelled ambitious, unique additions like the Western River Expedition and rushed construction of Pirates of the Caribbean.

The resulting experience was still a good ride, but lacking in comparison to longer, more detailed versions in other parks. Scenes are missing or shorter, there are fewer drops, and the entire experience feels rushed. Once the Pirates of the Caribbean movie became a surprise blockbuster franchise, Disney saw an opportunity to give the Florida attraction some unique elements while also appeasing fans of the films. While most rides received some of the movie characters as additions, the Magic Kingdom version includes additions and content from almost every iteration of the franchise. 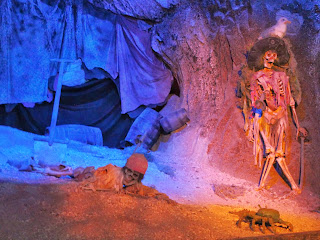 Pirates is nestled into the back of Adventureland, Magic Kingdom's monument to exotic stories from a less enlightened time. Your journey begins by walking into a Spanish fort, eerily empty except for a few skeletonized prisoners. The queue passes armories and supply rooms as it winds towards lantern illuminated docks.

After boarding, your plastic boat winds forward through darkened caverns, where ghostly voices and a vision of Blackbeard, if the effect is working, give cryptic warnings of the danger ahead. Bubbling water and swift projections hint at mermaids flanking the boat, as a beach filled with the skeletal remains of pirates grows closer. You pass a storm tossed sea and another dead pirate before plunging into the dark.

A small splash heralds your arrival into past, tossed into the middle of a pitched battle between a pirate galleon and the Spanish fort. Splashes from cannon fire surround the boat, which navigates its way through a town overrun by buccaneers. Jack Sparrow occasionally appears, hiding from the other pirates while he searches for treasure. Vignettes include a dunking interrogation, an auction of captive brides, drunken revelry, a burning town and imprisoned pirates trying to escape a fiery death. If the ride wasn't filled with humor and a lighthearted touch, it'd be horrifying. 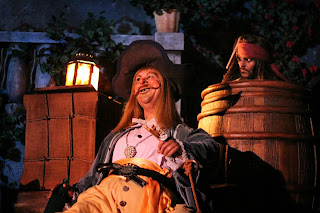 The line for Pirates of the Caribbean is beautifully ornate, with great attention to detail. Iron chains mark the path into the fort, and various weapons filled cages along the walls. Of course, this means that most guests will treat these items as noise makers, shaking, clanging, and attempting to pry loose anything within arm's reach. The chains are the worst part, as their echoing ring encourages others to join the noise-making, creating a deafening sound.

Other than the standard dark ride annoyances, like flash photography, talking, and cell phones, Pirates also gives a unique annoyance borne from its complex history. Long time Disney fans will squirm as they hear people talk about the new Pirates of the Caribbean ride, based on the movies. These uninformed individuals will ramble in confusion about how the ride seems so old and why it doesn't seem to have more to do with the movies. No matter how tempting, it's still not a reasonable reaction to smack these individuals upside the head with a Disney encyclopedia. 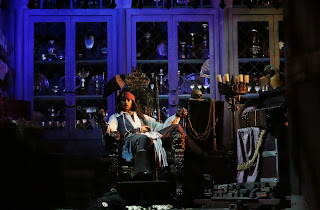 Pirates of the Caribbean is a classic Disney experience, even in a diminished form. It's one of the greatest dark rides ever designed, and has enduring appeal to anyone with a little bit of pirate spirit. There are some creepy elements early in the ride that may unsettle some children, but beyond that they should be fine. Be prepared to have "Yo ho, a pirates life for me!" running through your head for the rest of the day, and make plans to visit the superior Disneyland version one day.
Posted by Pajama Penguin at 3:12 PM