Videogameopolis: The Wolf Among Us 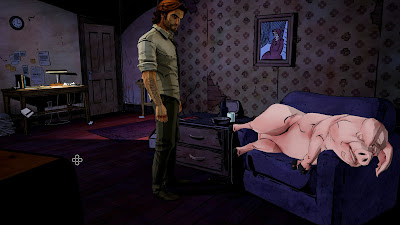 One of last year's video games of the year was an incredible tale of morality and consequences in a harsh, Hobbesian state of nature. Regrettably, I never played this game, even though it's primary gameplay was dialogue and choices, not gunplay or violence. That game is The Walking Dead, Telltale Games original story set within the greater Walking Dead fiction. I utterly detest anything with more than the lightest bits of horror, and zombies just exhaust me. I still felt like I was missing a minor cultural event, however, when the otherwise action obsessed mainstream gaming culture embraced something that encouraged thoughts, emotion, and analysis.

Last week, Telltale released the first chapter of its newest serialized game, The Wolf Among Us, titled "Hope". This game shares similar mechanics to The Walking Dead, and is also based on a cult comic book series. However, the settings and plot of both series are miles apart. 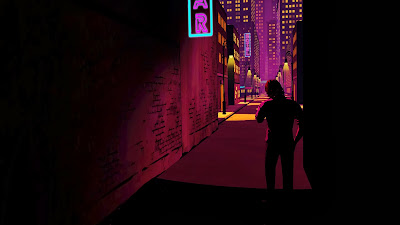 The Wolf Among Us is an original prequel to the Fables comic series. Whereas Walking Dead is about surviving the zombie apocalypse, Fables follows the lives of fairy tales living secretly in New York. Having been chased from their storybook worlds by something called "The Adversary," these characters, calling themselves Fables, hide their true natures from the world, living within their own communities and hiding away those that don't appear human to a place called "The Farm."

It's a story set up that doesn't sound unlike ABC's Once Upon a Time. Some have even accused ABC of stealing the idea from Fables, something that the comic creator, Bill Willingham, doubts is true. However, Fables is an extremely mature series that deals with adult issues, such as prostitution, corruption, poverty, and class conflict. This is a boon for fans of Disney, such as myself, that also possess a bit of a misanthropic streak. I enjoy the fantasies carefully crafted by the Mouse's house, but sometimes I wish the tales had a little more reality within their core. Grimm's Fairy Tales are already darker than what Disney usually presents to children, and this series reaches further into that darkness to expose the humanity in those stories. 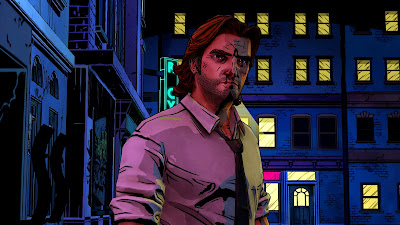 For example, The Wolf Among Us takes places approximately 20 years before the main Fables comics. It stars Bigby Wolf, otherwise known as the Big Bad Wolf of both The Three Little Pigs and Red Riding Hood. As part of the flight to safety, all Fables granted each other amnesty for past crimes. Bigby Wolf is actually something of a werewolf, appearing completely human most of the time. Since Fables are stronger and harder to kill the more the world is interested in their stories, Bigby proves incredibly tough in many ways, and is thus given the role of sheriff and law enforcement in the community.

He's a character constantly facing the guilt of his past crimes. Being part animal, he makes excuses for his carnivorous past, trying to claim he was simply hungry. At the same time, he knows he has to make amends for all the violence he caused, and is constantly reminded of those transgressions by the fear and hatred of other Fables.

One of the best quiet moments of the game is an appearance by one of the Little Pigs, which is not so little. He escapes from The Farm, noting that no matter how nice the place may seem, it's still a prison for those forced to live there and hide from the world. Crashing at Bigby's apartment, he constantly reminds the former wolf that he once destroyed the pig's house, and still owes him. 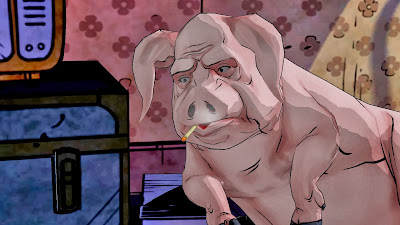 This is a common thread throughout the game, as consequences and problems of our reality are laid over classic tales. Mr. Toad, of the Wind in the Willows, constantly bemoans the monopolistic costs of appearance hiding magic that allow his family to remain in the city. Essentially, Fables not blessed with a human appearance are forced to work harder and pay exorbitant prices or live in a virtual prison. This builds an interesting metaphor for the lucky Americans that are born into privilege and wealthy, while those not so lucky are forced to toil for a fraction.

The Wolf Among Us tells these stories while exploring a core mystery, the murder of one particularly downtrodden Fable. Since Fables are incredibly hard to kill, recovering from wounds fatal to humans, any murder is a shocking event with horrifying implications. There aren't many fairy tale creatures in this world, and even though past sins were forgiven, nobody has forgotten what horrific acts these characters have committed in their past lives.

The gameplay then is minimal, but perfect for the investigation feel of the storyline. Unlike LA Noire, which often created unnatural, bizarre moments with its interrogations, Wolf Among Us allows the player to investigate crime scenes as long as they like, and doesn't punish the player for being less observant. Instead, certain scenes will simply play out differently based on the perceptions of the player. If you carefully check every clue and discrepancy in a witness's story, you can catch them in their lies and expose the true story. If you don't investigate, however, you have to resort to intimidation and violence, reverting into your old Big Bad Wolf persona. 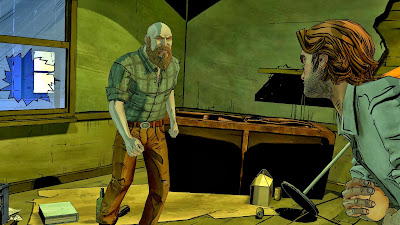 That's the core conflict of The Wolf Among Us, building Bigby Wolf into a man either making amends for his past, or using his lupine nature to instill order through brutality. Sometimes you're forced into fights, completed using simple key presses, but even some of these let you decide on the amount of violence used. Almost everything in this game is about choices, and these decisions have impacts that range from how other Fables perceive your character to causing the life or death of a suspect.

"Hope" ends on a cliffhanger, as most of Telltale's episodes tend to do. It's a huge moment that hints at a far stranger, darker sequence of events than a simple murder. There's an ambitious story arc planned for this series, it seems, something built to surprise even fans of the comic book series. Sadly, it's impossible to tell if The Wolf Among Us will continue to hold such a high standard of story telling. However, I can say that I'm more excited waiting for the next episodes than I have been waiting for any game, or any story really, in a long time.

Posted by Pajama Penguin at 7:11 AM