SeaWorld Orlando announced yesterday the triumphant arrival of a new baby manatee.  The mother was rescued in June after being discovered with serious injuries from fishing lines.  It was found that she was also pregnant, and last Wednesday she delivered a healthy manatee calf.  This adorable baby is being watched closely with mom behind the scenes, but hopefully we'll get to see the pair on display before they get released back into the wild.

Manatees are one of Florida's greatest treasures, and it's great to see SeaWorld continue to care for this endangered species.  These giant, peaceful creatures have a curious nature and laid back attitude, which unfortunately makes them easy victims of boat propellers and other man made hazards.  SeaWorld and other Florida groups rescue these injured manatees and bring them back to health before releasing them.  These efforts help save these gentle giants, but it also gives us an opportunity to see them up close. 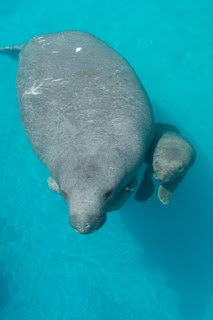 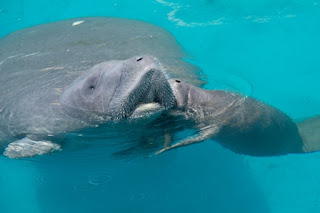 Posted by Pajama Penguin at 5:37 AM