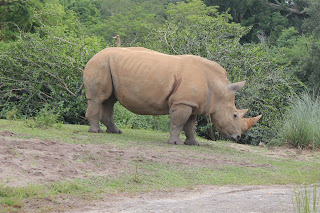 Today Nicole and I braved the rain to explore Disney's Animal Kingdom with hopefully lower temperatures and crowd levels.  It worked out well, with low wait times on most attractions, including 2 almost walk-on rides of Kilimanjaro Safaris.

It also proved a good day to visit, because some new additions could be spotted on Klimanjaro's savannah.  Well, there was at least a chance you could see the new babies.  Today was the first day on display for the new baby white rhino.  After the elephant pools, our guide warned us that tours were not allowed to stop in the last section of the ride, as it could frighten the mother and trigger her maternal instincts.  Disney does not want to show the result of an angry white rhino charging a truck filled with tourists. 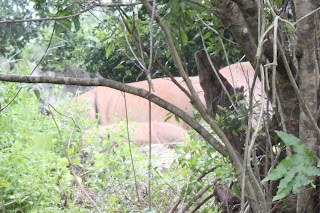 Our first trip through the safari, the mother rhino was nowhere to be seen, and the path to her was being blockaded by one of the work trucks.  The second ride, however, we managed to get the glimpse pictured above.  That smaller lump in in front of the bigger pinkish-white lump is the new baby rhino.  Not much of a view, and it causes the ride to be a bit rushed for now, but nice to know there's something new to see soon. 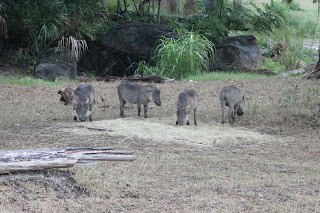 One group of adorable young that are now visible are the baby warthogs now visible near the white rhinos.  They're also not guaranteed to be on the ride trail at any particular time, but they are clearly visible when they are left outside.  No word on yet whether one of these is named "Pumba." 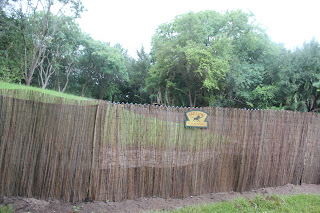 The safari's new zebra expansion construction continues, with tour guides now informing guests that it should open in two or three months.  At least one guide mentioned that more new animals than just the zebras were incoming, but it's not evident whether that was official information or just part of his attempt to keep the information in character.  The official story, now standard on the ride it seems, is that the zebra area is an attempt to re-introduce a species previously driven out by local farmers.

The shuddering bridge effect was still not being used today.  Our first driver let a guest know that the effect was previously broken but now fixed, and they were just waiting on all drivers finishing training with it before activating it again for guests.  I'd heard the information before, but it was nice having it confirmed by one of the cast members. 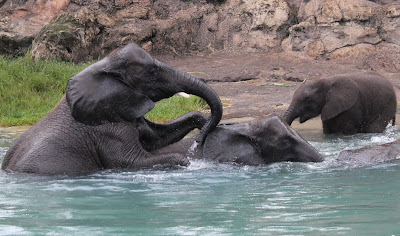 Finally, some more evidence why Animal Kingdom is great on a rainy day.  One of the elephant families was happily playing the water, recreating one of Jungle Cruise's famous scenes.  Apparently, the elephants rarely play in the water, and mostly only when it's raining.  It seems that while the humans are running for cover from the showers, the animals are living it up.  "Take all the pictures you want, they all have their trunks on today."

Posted by Pajama Penguin at 3:47 PM