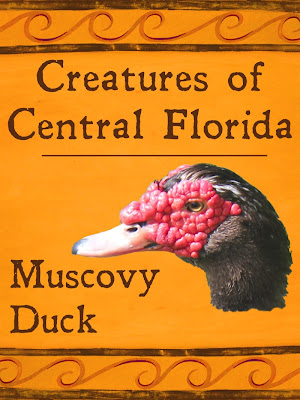 Suburban Florida is dotted with water features, from small natural lakes to the artificial ponds of gated communities.  In these quiet spots with just the right amount of civilization, you might find these rather large ducks waddling across the shores.  These are Muscovy Ducks, a non-native species that has gained a substantial foothold in Florida's ecosystem through accidental release and escape.

These ducks feature a combination of black, white, and green plumage, but their most recognizable feature is the collection of red, fleshy bumps, called caruncles, that cover the males' faces.  Females are noticeably smaller, have duller plumage, and do not feature caruncles.  Males hiss to communicate as well as elaborately shake their tails, while females have a weak call that sounds more like that of a smaller bird.

Muscovy Ducks are mostly descended from farm stock, and many still retain some of that domestication.  This provides a great opportunity to see these birds up close, even their chicks.  These water fowl have little fear of humans, and will gladly take food from an appreciator's hand.  Unfortunately, these ducks are considered an invasive species, and killing of them is allowed if they are pests.  Feeding them will increase their confidence, and may result in aggressive males who demand food.  With growing populations, there's some debate as to whether recognize them as a species of Florida or to stop their breeding and expansion into the ecosystem.

Additional information on these birds can be found on Ducks.org as well as from the University of Florida.