New Disney Dream Portraits with Behind the Scenes Shenanigans 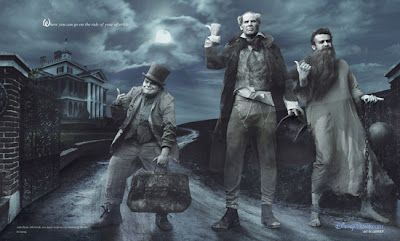 In 2007, Disney launched the Disney Dream Portraits series.  These unique advertisements combine the photography of Annie Leibovitz, celebrities dressed as Disney characters, and stunning artistic backgrounds.  Altogether, it creates a stunning effect that manages to evoke the magic of Disney in a very surreal way.

This week Disney released two new advertisements in the series which star some of today's best comedic actors.  One features Will Ferrel, Jack Black, and Jason Segel as the three hitchhiking ghosts from the finale of the Haunted Mansion. 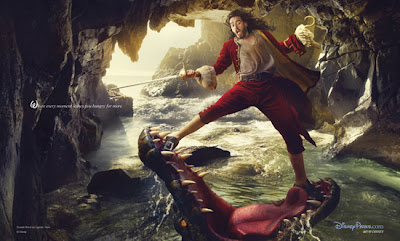 The other portrait stars Russel Brand as Captain Hook precariously perched in his nemesis's mouth.  Both of these photos are brilliant, and it's obvious the enthusiasm these actors had portraying such iconic characters.

As an additional bonus, DisneyParks Blog released two behind the scenes videos from the photo shoots.  Russel Brand is his usual wry British self, while Ferrel, Black, and Segel share stories of their experiences with the Mansion.  The most fascinating bits are that they built an actual crocodile for Brand to dangle over, and that Jason Segel geeks out for the Haunted Mansion as much as he does for The Muppets.