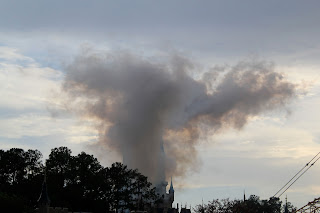 This week was a chaotic one for Walt Disney World, with almost daily severe storms, technical difficulties, and castles on fire!  Alright, not really, that's just smoke from the Dream-Along with Mickey show refusing to dissipate.  One of the many nasty effects of the stifling weather. 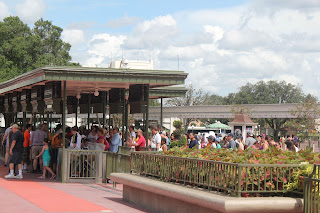 On Saturday, the Magic Kingdom's entrance turnstiles experienced a network crash, leaving cast members begging for the "black bags," which hold all the emergency entry supplies.  Once everything was distributed, the slow process of scanning tickets, stamping them, clicking the counter, and finally letting guests through began.  The cast member next to us started the mantra, "scan, stamp, click, go," trying to remember something he admitted he only experienced in training months ago.  He also kept claiming the system was "hacked," but that was most likely just playing to the crowd. 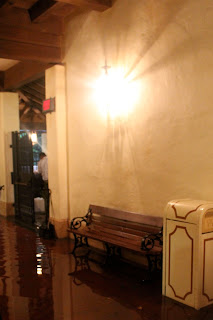 Later, the clouds unleashed yet again, quickly overwhelming the park with rain.  The bathrooms at Pirates of the Caribbean's exit were hit hard, leaving a massive pool that approached the gift shop. 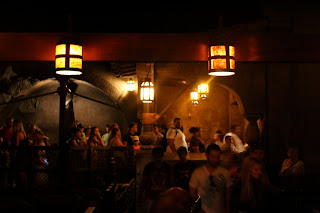 Speaking of Pirates, most of the fabric walls in the queue are finally gone, and purpose of the changes is still not obvious.  There are still no signs of the rumored interactive queue, and the decorative changes are mostly subtle.  I wouldn't be surprised to see the line re-routed again as more sections are modified, however. 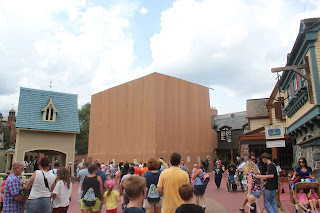 In Liberty Square, a giant brown cube has absorbed Yankee Traders as Fantasyland construction continues to grow.  This unpainted scrim stands out like a sore thumb and destroys the scale of the area.  The Haunted Mansion doesn't seem imposing with this in the foreground.  Hopefully this will be a quick rehab or modification, and the cube will quickly disappear. 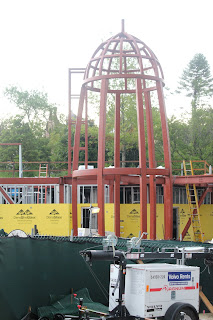 New structures have risen for the new bathrooms near Peter Pan's Flight. 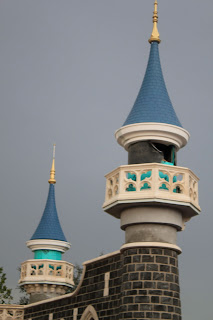 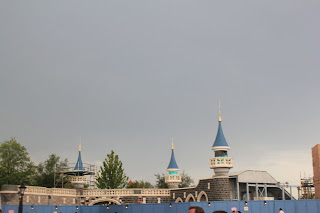 The castle walls of New Fantasyland are receiving more detail work, though the spires seem to have one major addition left to go. 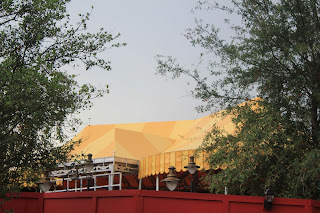 In Storybook Circus, the yellow tent has a roof and a majority of the structure work installed.

Finally, over in Animal Kingdom, Kilimanjaro Safaris has yet another route around the zebra construction, which has an extremely uncertain completion timeline.  Drivers are mentioning anything from a couple weeks to a few months before the new additions arrive. 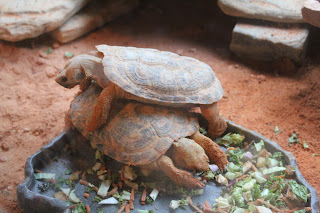 For a peaceful conclusion to this week of chaos, I present a turtle's favorite napping spot: another turtle.

Posted by Pajama Penguin at 9:54 AM