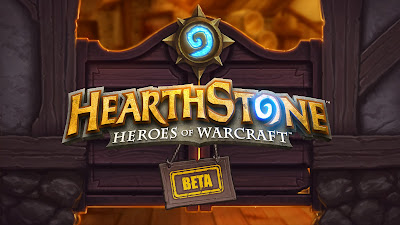 When something combines two popular obsessions, ones that have long been abandoned, you know there's potential for trouble. Hearthstone: Heroes of Warcraft is a new digital collectible card game (CCG) from Blizzard Entertainment. They've combined a simplified version of Magic the Gathering with the fantasy universe of World of Warcraft. While this is the second CCG based on Warcraft, it's the first completely digital game. It also has the makings of a truly addictive hobby.

When Blizzard first announced Hearthstone, it sounded like a money making opportunity first, and a game second. Card games are huge business, and digital card games can be a license to print money. Though they require ongoing development and balancing, virtual packs of cards are often priced at almost the same value as physical cards, and yet have none of the production and distribution costs. Although the pricing model is a bit expensive in the beta, the game so far is surprisingly polished and definitely not just a cynical marketing gimmick. 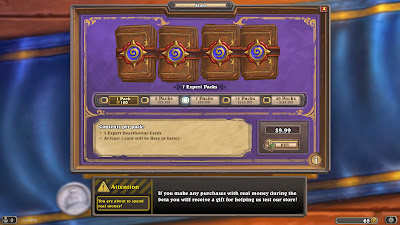 Hearthstone is currently a closed beta product, mostly complete but only available by invitation only. Users may register to join the testing, but the basic game will be free once it's released. Free, like all games of the type, is a relative term, and how the game is monetized will have a huge influence on the overall product.

The game client comes with starting decks for all 9 of the game's different classes. An additional set of cards to further customize those decks are earned through some early games. As part of the tutorials, the game grants a booster pack, and also gives a free chance at the game's arena mode. Arena mode has an entrance fee after that point, but standard and practice matches with constructed decks are free. 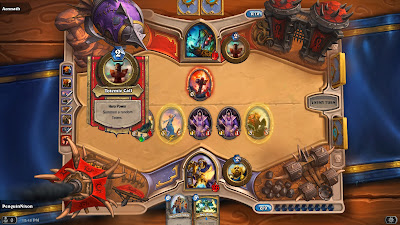 The game accepts two currencies, the in-game currency gold that is earned through play and real world cash provided by your credit card. Card packs start at 100 gold for one or $2.99 for two, with bulk discounts for larger cash purchases. The arena costs 150 gold for entry or a $1.99. The game currently has no plans to allow for trading of cards, meaning anything purchased or earned in game is locked to the player's account.

Gold seems like a viable way to play for free, but it accrues at a very slow rate, currently. In-game currency is awarded for completing daily challenges, winning games, and successful results in the arena. Unfortunately, only the arena awards a substantial amount, and only to players that manage to win a large majority of their games. The average player will only be able to afford a pack of cards a day, and an arena attempt every two days, at current rates. An excellent player could technically play the arena mode constantly with their winnings, but it would also require an incredible amount of luck. 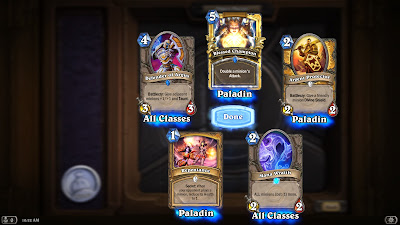 The pricing with real money is a major concern, then. Although $2.99 for 2 packs of cards sounds like a decent deal compared to physical card games, which retail one pack for the same price. However, Hearthstone card packs contain only 5 cards, although each is guaranteed a rare with the possibility of more. Still, two packs of cards only contain 10 cards total, which isn't great for the price. The game's base cards are sufficient for now, but there's a chance that players who don't spend lots of money will be unable to compete as the game ages and adds more cards. 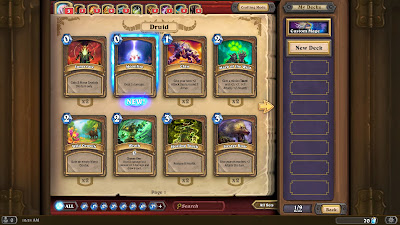 Arena mode has similar issues. $1.99 isn't a bad entry fee for a pseudo-tournament if it lasts a decent amount of time. The problem is that Arena mode lasts until you lose 3 times. A bad player will get only a few games, and little practice, out of the mode before their entrance fee is wasted. A good player will get lots of benefit from that fee, and quite possibly earn enough for the next entry free as well. Some kind of practice arena mode would be a good addition to the game, as it would help new players practice without paying a price for experience. 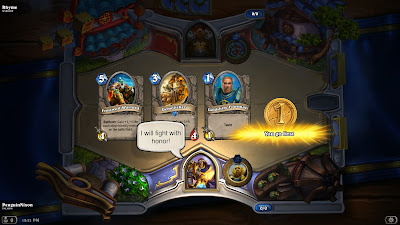 Hearthstone is similar to both Magic the Gathering and the now discontinued World of Warcraft trading card game. Each turn the player is granted one additional "mana crystal," the resource for playing spells and summoning minions. Players can cast spells and attack with creatures, but only during their own turn. While you can play "secrets," which will activate only when the opponent does something, there are no real decisions to make during an opponents turn. All you can do is watch and wait, as the tension builds and you try to figure out their plans.

Mechanics are simpler than many similar games, but in ways that just change how strategy works, rather than remove it completely. Players choose who to attack, whether the opponent's minions or the opponent itself, and minions can only block directly when they have a special ability called "taunt." While there are ways to manipulate resources, they are mostly generated automatically and are not tied to cards. There are multiple rarities of cards, but the rarer cards are more situational and less helpful in general. 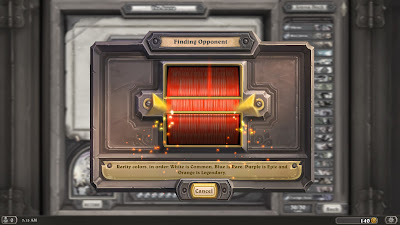 One of the most interesting twists is the class system. All 9 are based on the original classes of World of Warcraft, and each has a special ability that costs two points of mana. Effects range from a small direct damage ability to summoning weak minions to equipping the hero with a weapon to attack directly. Certain cards are also playable only by a particular class, reinforcing a play-style for each. For example, paladins create small armies that they protect with shields and increase in power, while mages use lots of spells to destroy and control enemy minions. 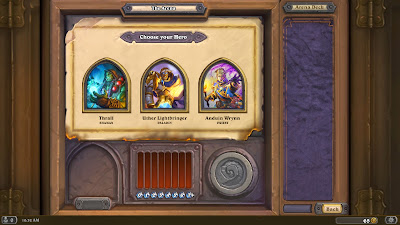 Constructed play is the main game mode, wherein you create 30 card decks ahead of time that are played against opponents in ranked or unranked matches. Arena mode mimics the "sealed" play of other card games. You're given the choice of 3 random classes to start, and then draft cards from a random choice of 3 of the same rarity. Once you have 30 cards, you face opponents until you either win 9 times, or lose 3, at which point you receive rewards based on your overall results. You do not keep any of the cards drafted for your arena deck, but you do always receive a pack of cards as one of your rewards.

Arena is possibly the most fun part of the game, rewarding smart decision making with limited options over having the most money to buy the best cards. As already noted, the potentially prohibitive cost of entry is unfortunate, so hopefully a more affordable way to play is eventually offered. 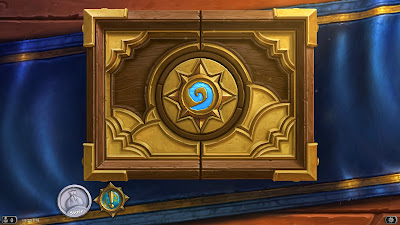 Hearthstone is set within a Warcraft pub, played out on a virtual game board. The board includes small animated elements around the edges, giving some nice color and interactive toys to help pass time during opponent's turns. All actions with the cards are accompanied by appropriate sound and visual effects, giving the game a lively feel. When something major happens, like an extremely powerful card appears or an attack does extra damage, the game makes it feel like an event. 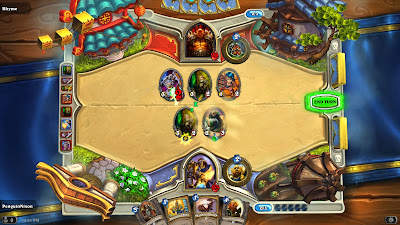 Everything takes advantage of the Warcraft theme. Cards feature decent to great artwork depicting famous characters and elements of the universe. Music is taken from Warcraft games of the past, and includes many jaunty tunes appropriate for a pub. While experience with past games in the series is not necessary, Hearthstone has a lot to offer to nostalgic Warcraft fans.

The game just manages to feel dynamic and exciting while still resembling a card game, something that isn't easy to accomplish. There's also lots of room to grow within the expansive Warcraft universe, which means it should be easy to add more content for quite a while to come. 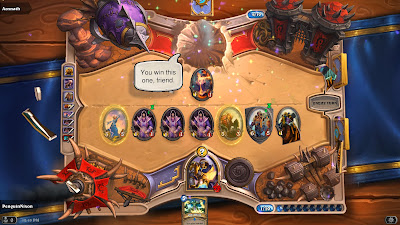 Overall, Hearthstone is already a highly polished game that manages to make a virtual card game exciting. It's extremely accessible with lots of tutorials, simplified yet still interesting mechanics, and a fun aesthetic. However, the entire game's future rests on how Blizzard Entertainment balances the costs of the game. If it stays practical to play the game without spending exorbitant amounts on cards and fees, than the game will thrive and remain fun. If, however, the game becomes a chore for anyone not willing to empty their bank accounts, then it's in danger of being a fleeting, niche entertainment for all but the most competitive.
Posted by Pajama Penguin at 11:27 AM