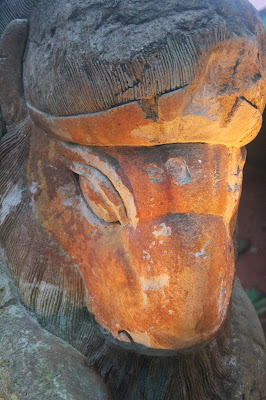 Five years ago, Disney launched the Vinylmation line of collectibles. Inspired by urban vinyl and art toys, the series was created to replicate the success of Disney pin trading. The official launch was at Festival of the Masters, a yearly art exhibition that takes over Downtown Disney.

To mark the 5 year anniversary, Disney released multiple new Vinylmations, including event exclusives, and had a signing with several of the artists behind the vinyls. I was there to cover the new releases and events, so I decided to mark the anniversary in my own way. Yesterday was the second attempt at the Vinylmation Trading Dash, and it was both a success and a failure. 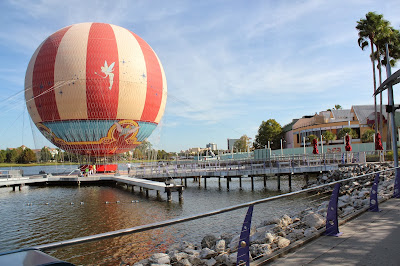 The schedule for this Dash was simple: Trade vinyls at Downtown Disney, visit the Festival of the Masters, then the outlet store, followed by trading at all four theme parks. The order of the day was nearly reversed from last time, which I hoped would make it easier to complete this time. It also helped that I had more time to complete the Dash, though several of the parks were closing at 7:00pm for various reasons.

Arriving at Downtown Disney, I found parking to be extremely hectic already, but found a spot relatively close to the entrance of West Side. I quickly weaved through the artists booths still rising as I hoped that D-Street might not have a line. New releases always attract different levels of crowds, from just a few dedicated fans to large throngs of people.

This particular morning, I didn't see a single person in line in front of the store. My moment of elation quickly turned to resigned disappointment when I remembered that most of the line is across the walkway. I gave a hesitant glance away from the store, and discovered a line that snaked its way down stairs, back towards the waterfront, and around the corner out of view. I walked to the back of the line and enjoyed the gentle breeze as I cursed my hubris in not bringing sun screen. The weathermen predicted that the day would be cloudy, which of course meant that the sun beat down for most of it.

The wait was longer than I wished, but not interminable. It helped that I had a nice conversation with a Disney Cast Member in line as well, though I unfortunately never caught his name. I also never discovered what he did for Disney, other than it required travel and apparently he had some level of confidential information. Still, other than missing my opportunity to pass on a business card and beg for a Disney job, it helped pass the time until I could make my purchases and first trade. 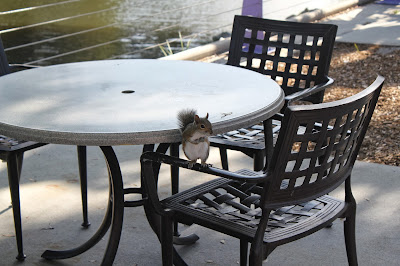 D-Street's Vinylmation section was overflowing with excited collectors, even with the crowd control measures. Thankfully, they were prepared for the heavy demand and made sure to re-stock everything quickly. I managed to make my purchases for myself, and others, quickly, before tracking down the trading boxes. In an effort to keep the register area clear, Cast Members were manning a temporary trading station in the corner of the store.

After making my trade, I adjourned to some nearby tables to examine it and all my purchases. A squirrel occupied a neighboring chair, and seemed to pose for pictures. Unfortunately, I had nothing to offer the photogenic creature, and he soon scurried away to forage. 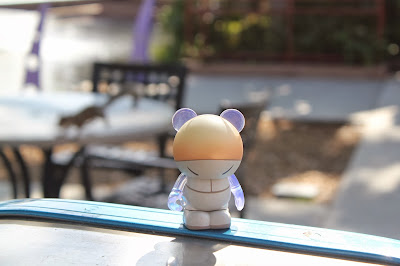 Before he did, he gladly helped give some background to my photo. My first trade of the day was slightly disappointing, as I received Hop-Lo, the dancing mushroom from Disney's Fantasia. I already have the box set that includes the figure, but it's one of my favorites and I wanted one opened anyway. Still, this was an item currently available at the outlet stores, which was not a good sign. It would actually prove to be the highlight of the trading day. 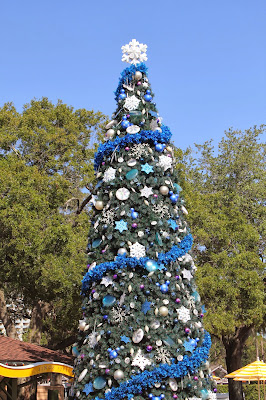 While Festival of the Masters had mostly taken over Downtown Disney, Christmas decorations were also everywhere. Even the giant trees had appeared, drawing attention away from the surrounding event. Christmas in Florida is a strange experience, as the weather still feels like spring and summer, yet everywhere is decorated and the holiday music plays constantly the day after Halloween. 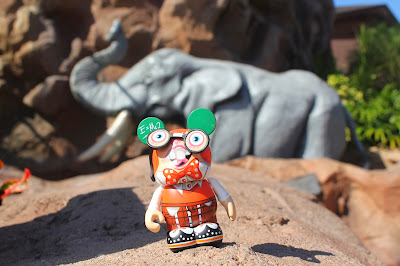 Vinylmation trading at Disney Pin Traders in the Marketplace has never been great. This day was no exception, as my prize was the nerd from the little loved High School series. The best thing I could say about the figure was that the glasses weren't missing

I departed Downtown Disney and fought my way to the outlet store. Although it was early afternoon, the parking lot was already filled, and the garage was half full as well. Disney's Character Warehouse recently received a huge variety of new Vinylmations, but unfortunately, nothing new has emerged since. After purchasing a few extra items, I headed to my first park, Epcot. 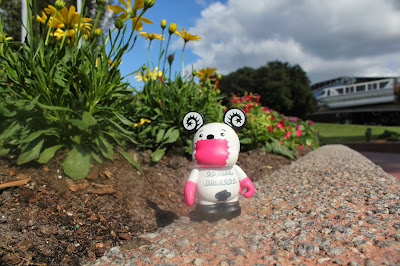 Epcot was reasonably busy, since this was one of the last days of the Food and Wine Festival. Lots of people in the parks did not equate to better trading, as my find at MouseGears was a Zodiac series Ram. While I like the figure, it's an old outlet store figure. Even worse, it was in bad condition, with a multitude of scratches and discolorations. I planned to hold on to most figures during the day to spread the Vinylmations around, but I wanted to immediately rid myself of something in bad shape. 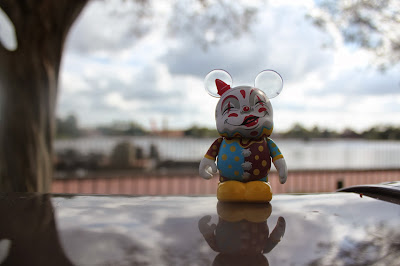 Nearby Disney Traders provided nothing better. The Under the Big Top Clown was a figure available at clearance prices from the Disney Store for quite a while. This Vinylmation was also discolored, with large, dirty blotches. Trading at Epcot was a depressing experience, so I raced a monorail to the station to expedite my journey to Magic Kingdom. 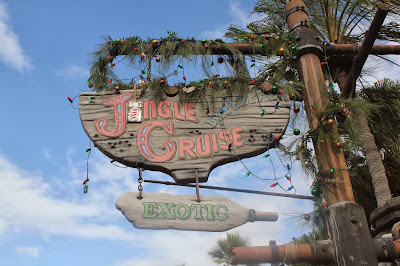 The monorail switch at the Transportation and Ticket Center failed, however, as the express monorail to the Magic Kingdom seemed to be temporarily out of commission. The ferry boat is a much slower method of transportation, but it proved a nice break from the constant movement. Drifting toward the park, I could already see some of the new Christmas decorations in the distance, and hear the castle show playing the next of its countless performances.

The Magic Kingdom was immersed in the Christmas spirit, which was unfortunate for me. The winter holidays can elicit both joy and sadness in me, and this afternoon, tired and without my wife accompanying me, a general melancholy feeling was the result. It didn't help that one of my favorite rides, the Jungle Cruise, had just finished it's brand new holiday transformation into the Jingle Cruise. I couldn't experience it without my wife with me, so I had to pass it and wait for another day. 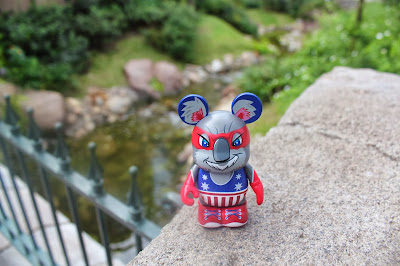 Managing to dodge the afternoon parade, I traded at the Frontierland Trading Post. Even though this location has 2 small and 2 large clear trade boxes, as well as a mystery box, there was absolutely nothing worthwhile. I ended up with a Zooper Heroes Koala, a figure I only kept to trade another day. At the very least, this vinyl was in perfect shape. 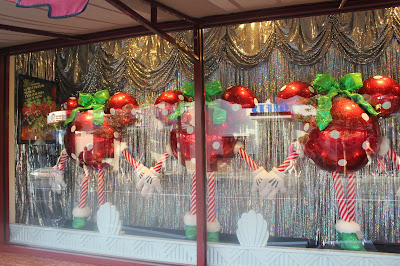 No monorails reach Hollywood Studios, so I returned to the Epcot parking lot and made the short drive. Hollywood Studios has relatively few Christmas decorations away from the Osbourne Dancing Lights, but one store window did showcase these bizarre, high-kicking Christmas bulbs. I have to imagine this is what Santa sees when he hallucinates. 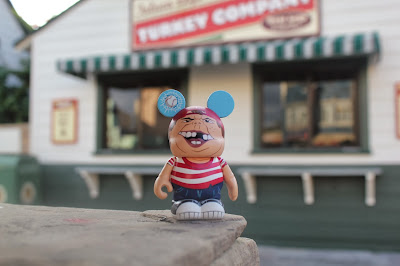 To my surprise, there was a line at Hollywood Studios trading spot, found in the store Villains in Vogue. Nothing particularly good was discovered by the people ahead of me, until the last person before my turn was offered an old Muppet Vinylmation depicting the Swedish Chef. This is a figure I don't have and my wife really wants, so I was a little crushed when it was taken.

My spirits did not recover when I received my vinyl, the High School series Bully. While I guess it would make a nice reject companion to the nerd received earlier, I still was not impressed. The turkey leg stand seemed like the perfect backdrop for this particular day of trading. 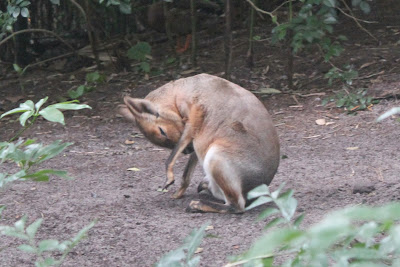 I was nearing the end of the second Vinylmation Trading Dash, and time was waning. Only two hours remained before Animal Kingdom closed, which was plenty of time. However, the daylight was beginning to disappear, and my energy was quickly evaporating with it. My focus was gone as well, as I found myself driving towards the gates of the wrong Kingdom. Heading back through the entrance to Magic Kingdom's parking lot, I immediately exited and corrected my route.

Much of Animal Kingdom's parking lot was inaccessible, due to an upcoming event. I had to walk from the most distant lot, passing a constant stream of guests leaving for the day. Heading through one of the few open entrances, I stopped again to visit with the mara, who was giving himself an evening bath. 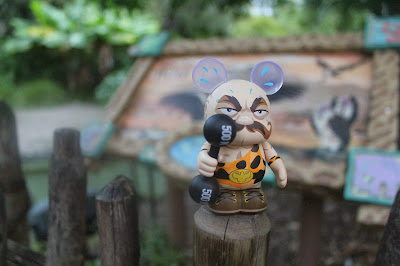 I was exhausted and beaten at this point, but not without hope. There was still one trade left to be made, one last chance at a great find. My hope was futile, however, as I received another Under the Big Top figure. This one was the Strong Man, one I already had, but it was in good shape and included the accessory. I wouldn't feel guilty trading it later, at least. 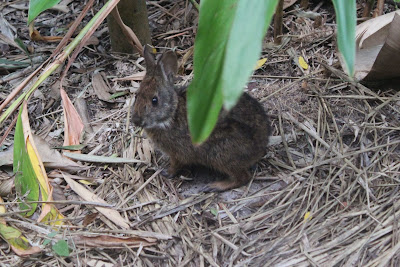 Most of the animals were already backstage or sleeping for the night, which meant I couldn't visit with most of my favorites before leaving. Standing in a particularly empty trail, I heard a soft rustle in the brush. Looking down, I spotted an extremely timid rabbit that was enjoying the lack of other animals. I watched him search for food, but he quickly fled when he realized he was not alone. Still, it was the highlight of my trading stop at Animal Kingdom, which isn't saying much. 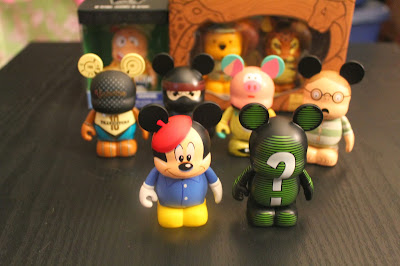 I drove back home victorious, having completed all my stops with time to spare. On the other hand, I had just experienced possibly my worst day of trading in the parks all year. Seven total trades, and not a single Vinylmation that I didn't already have or that had any value to anyone. I was also exhausted physically, with a sore leg, strained back, and a sunburnt face.

Thankfully, I made some purchases during the day that made up for it. I was especially lucky to receive the variant of one of the limited edition vinyls. Of course, I also managed to get yet another double as well, which means my luck wasn't that great.

The second Vinylmation Trading Dash ended up the opposite of the first. I succeeded in my goals, but failed to find anything worthwhile. However, I know I'll try it again sometime soon. It's good exercise, an interesting challenge, and I'm just crazy enough to keep trying it again.
Posted by Pajama Penguin at 11:59 AM