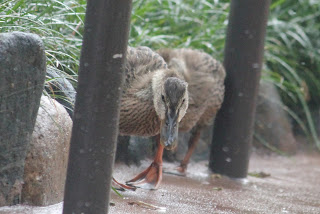 Last year I posted a couple articles recounting terrible tales of bad parenting at Theme Parks. While I continue to find many negative examples to share, I also see parents giving their kids some magical moments the right way. This is one of those stories.

I've mentioned before, and I'm sure I'll mention many more times, that Disney World is often an unexpected haven for nature. Many animals, especially birds, that are less frightened of humans find the theme parks a great place to rest, raise their young, and steal some french fries. You can spot a wide array of unsuspecting visitors if you walk the parks slowly. Spotting a group of rabbits or some ducklings can often be as magic a moment as meeting a favorite character or watching a show.

Unfortunately, most tourists visit the parks with an "all or nothing" mentality. Every attraction must be visited, every moment must be filled with manufactured wonder, or the entire trip is a waste. These are the same people, and specifically parents, who visit Animal Kingdom, rush their children away from the animals that fascinate them, then bemoan that the park has "nothing to do." When the children do get a brief moment to explore, they expel pent up energy in destructive ways, like kicking at the wildlife or trying to destroy theming. 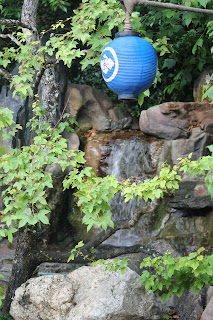 After a sudden rainstorm, my wife and I were enjoying dinner under the umbrellas at Epcot's Japan Pavilion, protected from any more cloudbursts. Also hiding from the rain was a mallard duck that seemed to have a slight limp. We idly watched her as we waited for the weather to clear, and wondered why she didn't pick a more protected spot to rest. While this seating area was tucked in a quiet corner of the pavilion, with a gentle waterfall and pool nearby, it was still not an ideal place for an animal that couldn't escape quickly. 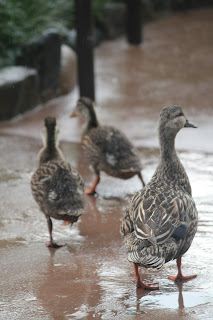 A loud chorus of "peep" answered our question. From some unknown corner emerged a set of five ducklings. Well, duckling may be the wrong terms, as these were definitely ducks in their late adolescent phase. However, they still peeped like ducklings, were still following their mother, and at least one of them was continually getting lost from its siblings.

Some nearby children eating with their family finally noticed the peeping chaos. Moments later, they were following the little ducks around the seating area, trying to get as close as possible while guiding them back into a single group. They didn't attempt to grab the ducklings or scare them intentionally. One of the girls even admonished the ducks for eating rice from the ground, saying "You'll get sick!" 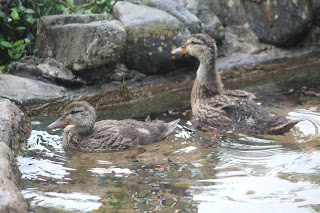 These kids were having a magical Disney moment, and their parents understood. They didn't yell at them to finish their food, or force them to leave and run off to the next country. Instead, they just supervised their children's exploration, only interfering when the ducks were getting a little too scared. In the end, there was a whole crowd, adults and kids alike, watching the ducklings swim around the little pond, reunited as a family.

Disney World is a unique place, an unnatural wonderland that often connects with the natural world. It's a place of precision detail and design that also gives opportunities to embrace the spontaneous. Let your children enjoy the little moments that fascinate them, and let them play with the ducks. When they're done, the rest of the park will still be there.
Posted by Pajama Penguin at 10:05 AM