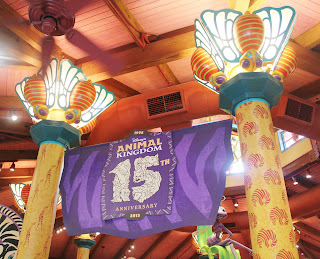 On April 22nd, Animal Kingdom celebrated its 15th Anniversary.  I had to attend, because I was actually there the year it opened.  Ever since, it has been one of my favorite Disney parks, if not my absolute favorite.  I don't care how many times pull out Disney's old lines about it being "not a zoo."  Animal Kingdom is the most beautiful zoo I've ever experienced, which just happens to include some of my favorite theme park attractions as well. 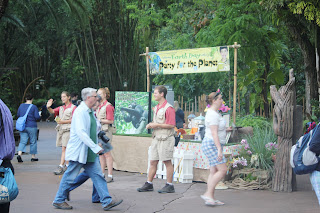 As we headed into the park before opening, we spotted one of the many "Party for the Planet" locations.  These stands were set up to either teach kids about nature, adults about gardening, or feature nature inspired artists.  While they were a nice addition to the park, they are also the same offerings from every Earth Day, which also happened to be April 22nd. 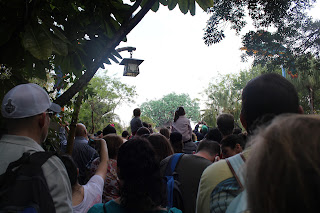 I had hoped to see the pre-park opening ceremony for the anniversary.  Unfortunately, it seems there wasn't planning for the amount of people that would attend, because I saw nothing of it.  I was literally stuck across a bridge in another "land" of the park, unable to hear the proceedings or see more than a sea of heads in front of me. 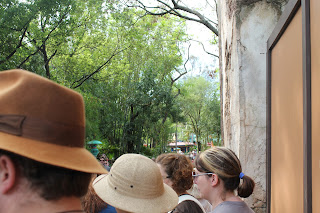 Next, we looked for the special event merchandise, which I was covering for Vinylmation World.  Even though we immediately got into line, we still ended up waiting 2 and a half hours just for the opportunity to see and buy limited edition items.  Yet again, I had the pleasure of staring at strange craniums for interminable amounts of time.  The only reason I subjected myself to the punishment was my aforementioned commitment to get the necessary pictures.

After the event, I heard several Disney pundits talk positively for the experience, since they were at the front of the crowd for the ceremony and the front of the line for the merchandise.  For those of us literally minutes behind them, however, the event was a bit of a fiasco.  I heard a good amount of disgruntled grumbling by guests, and the Cast Members trying to assure everyone that the line "Wasn't that bad!" just made things worse.  I really hope Disney plans better for demand in the future, because I'll be hesitant to show up again for such events. 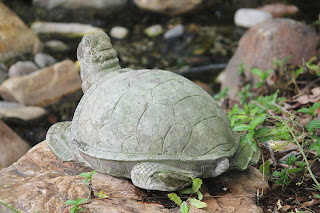 Desperately hungry and very disgruntled, my wife and I took refuge at the wonderful Flame Tree Barbecue to eat and collect ourselves.  While enjoying the outdoor seating, I noticed this lone stone turtle, perched next to a small waterway.  This is one of the great little details of the park, something that you only notice if you're taking things slow and enjoying each area like its own detailed scene.  Animal Kingdom is not a park to run through while making dash to the next ride. 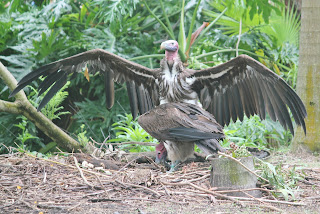 Deciding that the remaining 15th Anniversary, or really Earth Day, offerings weren't worth much bother, we decided to enjoy Animal Kingdom by actually seeing the animals.  Spring fever was everywhere.  Even the vultures, creatures normally associated with death, were focused on life that day.  They were busily working on a new nest, hopefully for some new arrivals in the near future. 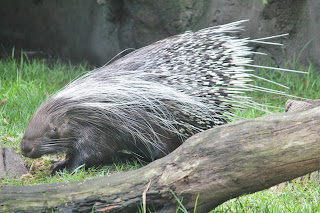 The crested porcupine are rarely seen.  This is both because they're hidden on a slightly out of the way path and they are nocturnal.  These giant porcupines are also extremely shy, and will often bolt for cover if they are discovered outside of their cave.   This one was hungry enough to come out of hiding and stay exposed, giving a rare opportunity for a good view.  I definitely would not want to scare one of these in the wild, because those quills are huge and potentially lethal. 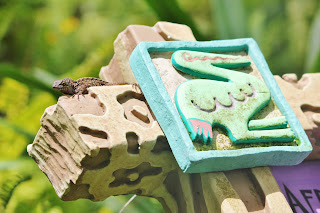 Due to the abundance of greenery, wild animals also make Animal Kingdom their home.  This brown anole took refuge on the crested porcupine's sign. 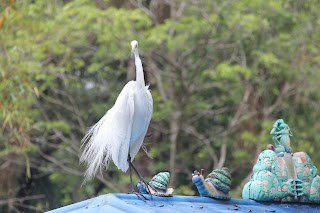 This egret looked slightly confused.  I wonder if it thought those snails on the roof were real. 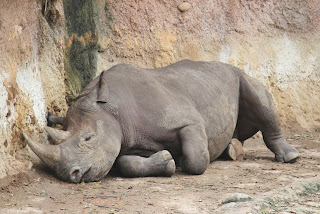 It seems the animals are still adjusting to the temperatures rising back into the 90s, as most were sleeping along the Kilimanjaro Safaris route. 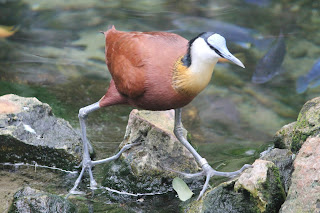 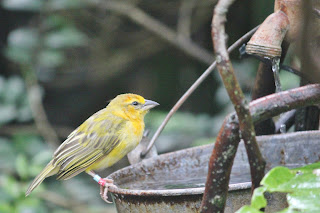 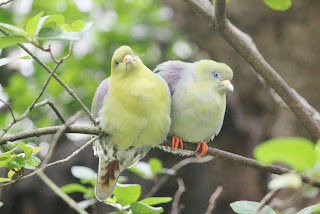 The residents of the Pangani Forest Trail's aviary were quite a bit more active.  Lots of nest building activity was on display, which seemed to be a common theme in the park.

The trail's hippo made a brief trek on land, and even seemed to imitate the hippos on the Jungle Cruise.  A mother duck and her ducklings were not amused by the sudden appearance of their tremendous neighbor. 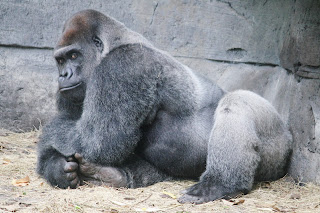 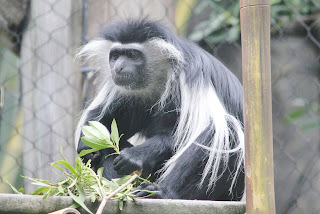 Primates on the Pangani Trail were also taking it slow, with this gorilla posing for the camera, while the colobus monkeys enjoyed a lazy snack. 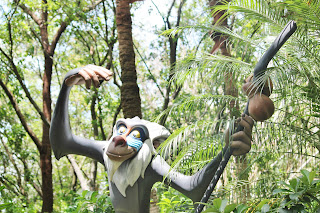 We admittedly miss Rafiki's Planet Watch on most visits, due to the train being the only way to reach this remote location.  That's unfortunate, because it features some interesting exhibits and a chance to see live veterinary procedures. 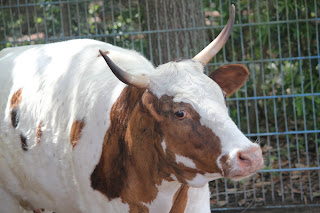 The best part of it is the petting zoo, featuring sheep, goats, cows, donkeys and pigs.  The cow didn't seem too appreciative of the crowds and stayed distant. 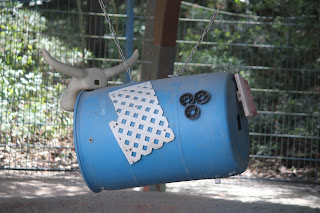 Also in the cow's pen is one of the subtler hidden mickeys. 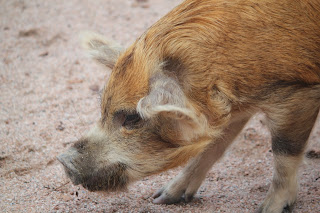 Probably the cutest animals to interact with are these pigs.  They are very laid back animals, lying down on their sides so they can sun themselves and receive belly rubs.  When you do rub their bellies, they make appreciative snorting noises.

Overall, it was a good day, even with the let down of the anniversary celebration and the rough start.  It's a testament to how enjoyable Animal Kingdom can be if you savour the experience.
Posted by Pajama Penguin at 8:07 AM