55 Pounds to Disneyland: An Apology to the Manatees 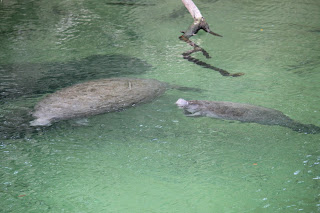 In general, I consider myself a relatively enlightened person.  I try not to judge others, consider all sides of issues equally, and above all not hold prejudices.  Thus, I find it horrifying that I have perpetuated a stereotype.  I have compared my excessive poundage to that of an innocent victim that deserves no such shame.  The truth of the matter is: I was wrong, manatees are not fat, even if I am. 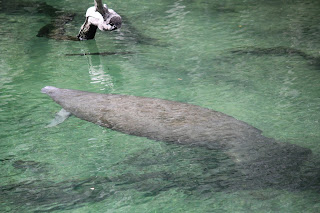 The worst part of spreading this lie is that I knew manatees were just naturally large creatures, with very minimal body fat.  For some reason, I continued to claim they are filled with blubber, like me, and not the relatively healthy, if slow moving, creatures they are.  These are beautiful animals, though I still don't know how they were once mistaken for mermaids.  I guess when you're a dehydrated, cabin feverish, rum besotted, scurvy ridden, possibly one eyed pirate, anything looks attractive compared to a fellow pirate. 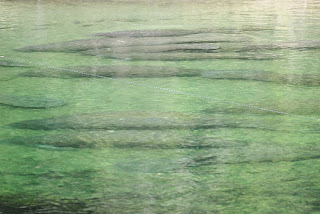 Anyways, manatees' lack of body fat does prove negative in one way, but ironically also gives me a reason to get outside and exercise.  During the slightly colder winter months, manatees cannot survive in the lower water temperatures of the ocean since they have no extra fat to hold in warmth.  Whenever the temperature drops, they are forced to head inland to power plants and natural springs, where the water remains heated.  These are the only places where you can reliably view manatees in the wild, something I've always wanted to do.  Anything that inspires me to venture into the great outdoors is a big help with my weight loss goal. 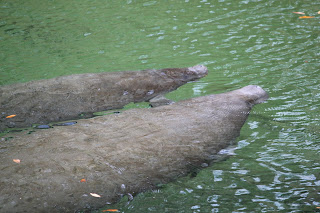 Trying to compensate for a celebratory meal, I spent part of my recent birthday at Blue Springs State Park, possibly the greatest location in the world for manatee watching.  The park is only a half hour north of Orlando, and its a great place to see the wild side of Florida and get some fresh air away from the theme parks and tourist attractions.  During the summer it's also a wonderful swimming spot, but during the winter the water is manatees only, and it is quite a sight to see. 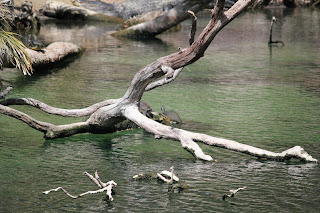 During my trip, I saw several manatee calves, one of the most adorable things on this planet, as well as several large clusters of adults.  There were a little less than fifty manatees present, only a moderate day for Blue Springs, but still enough to make the trip worthwhile.  Although you can't get too close, walking trails around the water give a great view from above, especially when the manatees surface for air.  If you're lucky, a manatee or two will even swim close to the shore, giving a great view of how they glide through the water.  The rest of Florida's wildlife is also on display, with native birds watching for gar and other large fish while huge alligators and turtles warm themselves in the sun. 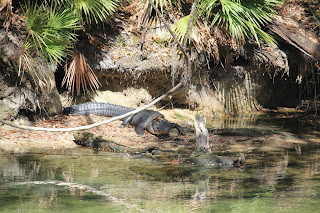 Maybe Blue Springs is a great place to not only get some fresh air, but also find inspiration to get healthy.  I'm not saying look at the manatees, because they are already in the correct shape.  I say look at the giant alligators, and realize that you better be able to outrun them if you're living in Florida.

Posted by Pajama Penguin at 6:46 PM