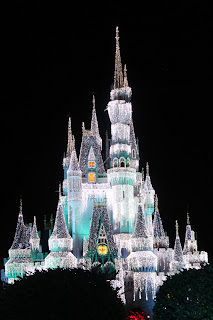 The continuing tales of one chunky Disney fan's personal quest to lose 80 pounds and visit Disneyland, in that order.
Next Post: 75 Pounds to Disneyland: Temptation Strikes

There are two things that have retained their pull from my childhood and continue to influence my life.  One is a fascination with the Disney company.  The other is a fascination with food.  The former mostly just drains my wallet, but the latter has resulted in an ever-expanding waistline.  Late last year, I finally exceeded the 300 pound mark, obliterating any excuses that I hadn't gained that much since the last time I weighed myself.

The problem then became not how to lose weight, but rather how to keep myself motivated.  Saying I was going to stay active and eat healthier is easy enough.  Actually following through, as time to exercise shrank and the wonderfully tasty theme park food continued to call to me, was a far more difficult proposition.  I once shrank 60 pounds just by being too active to think about food, while interning one summer in London.  Once I returned home to the usual grind, my weight resumed its steady march upward.


These thoughts were bothering me Christmas morning, as I watched the annual Disney Parks Christmas Day Parade.  Seeing all those shots of happy guests at Disneyland, I was reminded how I always wanted to visit the first great theme park, Walt's baby.  I've never had the opportunity, and the costs involved were just too prohibitive compared to many other vacation options.  Visiting Disneyland was a goal I didn't feel any closer to achieving.

That's when inspiration struck.  Combine my goals and give myself an incentive.  Lose weight, and reward myself with a trip to the "Happiest Place on Earth."  I decided to make my first goal weight 220 pounds, the amount I weighed when I was last almost healthy.  This time I would make that change permanent, and I had more than one reason to get me to that point.