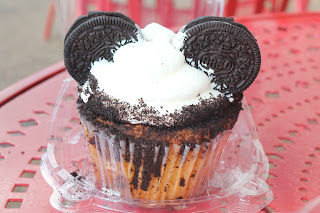 The Disney Parks are both a great benefit and detriment to my weight loss.  They definitely give me a reason to be active and walk miles upon miles at a time, especially when my favorite rides are on the opposite ends of the park.  I don't mind exercise when I trick myself into doing it.

However, I also find something more than just exercise while walking these theme parks.  I'm forced to pass numerous restaurants, snack stands, and carts peddling the most decadent desserts and foods known to man.  Humongous cupcakes, massive sundays, french fries with unlimited cheese sauce, burgers topped with onion rings and bacon and grease, all these things tempt me as I try to improve myself.


On Monday, I ended up giving in a bit.  Having spent over a week eating well, exercising daily, and generally trying not to become a manatee, I broke without even realizing it.  First came snack time while at Hollywood Studios, where I picked a strawberry parfait for a snack.  I justified it by saying it contained fruit, ignoring the fact that the percentages were about 90% custard, 10% fruit.

Having already given in a little bit, I followed up by sharing a Spinach and Mushroom pizza at Wolfgang Puck Express.  Justification struck again, as I reasoned that I was only having half the pizza, and it was comprised of two things that are good for you: spinach and mushrooms.  The fact that it also included an incredible amount of fattening, greasy cheese was balanced out, right?

I was wrong.  The next morning my first weigh-in showed a slight increase in weight.  Nothing major or goal breaking, but enough to show I couldn't make such indulgences a habit.  I was definitely disheartened, and for the first time since setting my goal I began to doubt if I could change my habits.

Temptation showed itself, and I surrendered to it.  I let myself justify bad choices, a trap that I will have to carefully watch out for in the future.  Eating healthy is far easier than I ever could have imagined, but sometimes I'm still a little weak.  Tomorrow I'll go see the manatees and remind myself what I don't want to become.

Posted by Pajama Penguin at 6:19 PM