Jack Frost Can Go to Hell! 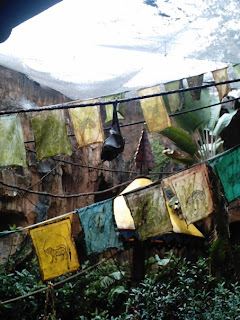 This photo has nothing to do with the blog post, it's just one of my favorites that we took on our last Disney trip. Thought it was more interesting than yet another photo of bleak Indiana weather.

Random note: The title of this blog post comes from an article I wrote for my college during my senior year, back when I still lived under the delusion I could be a music journalist. I wrote a very long article making fun of emo music, with an entire song list worked out. “Jack Frost Can Go to Hell!” was one of the song titles. I then wrote an article, appearing in the same issue, defending emo music. This is what happens when you’re a student editor with not a single dependable writer.

This weekend, Nicole and I finally got to spend some time together about 3:00 pm on Sunday. This is our “weekend” at the moment. During this time, we could have gone to a nearby fair and made ourselves sick, went to Fort Wayne and bought things we don’t need, or just not move. We chose a variation of the latter, went to dinner, got ice cream, and walked along and relaxed by one of the nearby lakes.


It was a nice time, really, not much to talk about. We saw turtles hunting insects above the surface of the water, odd little fish darting about the shallows, and I laid my head in her lap as we sat on the end of the pier, just watching the activity on the water. A peaceful and relaxing time overall.

Eventually, my half awake brain started to wonder why I wanted to move all the way to Florida. I was perfectly happy and content in that moment, and it seemed anything else would just complicate things. Why bother going all that way for something I might find I didn’t even want in the first place?

Then I remembered something. I’m still in Indiana, and soon enough, it will be fall, then winter. At that point, the beautiful lake becomes a sheet of ice, the roads become impassable death traps, and the sun is blotted out as the wailing of the peasants rises into the air.

I used to love Indiana winter, but that was when every winter storm brought promises of cancelled classes and lazy days on the couch, gloating over all those adults that still had to go to work. Now that I’m one of those adults, I am getting my comeuppance. Last winter nearly killed me both physically and mentally. The toll was even worse for Nicole, who has far less tolerance for dreary weather and a far more dangerous automobile.

I don’t know if either of us will be able to handle another frigid winter. Before, I thought we were stuck at least until next year. Now it’s becoming almost a mania to get out before the snow falls, and wraps us in its blanket for another series of bleak days, weeks, and months.