The Islands of Adventure Conundrum 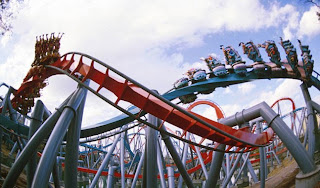 Picture courtesy of http://www.universalorlando.com/Amusement_Parks/Islands_of_Adventure/islands_of_adventure.aspx. For those reading the braille version, it's a coaster at IOA. Which they still call Dueling Dragons. Even though it's now Harry Potter themed with a completely different name. They really need to update their website.

Planning continues for the great escape, and my latest evil schemes are particularly conniving. Malicious schemes are dastardly? Okay, my decent ideas are not exactly moronic. I’m not an evil genius. Yet.

Anyway, since Nicole and I will be making a rather drastic move in a southward direction, it’s difficult to scope out new places to live. We can utilize the internet, but since you can’t trust half of what’s posted there, it’d be just as effective to throw darts and see where it lands. Personally, I’m hoping it hits “Squatting in the tequila store in Epcot’s Mexican pavilion.”


Which brings me to my idea, which is another week long trip to Florida sometime this fall. Most of this trip will be utilized to check out places to live while visiting Nicole’s aunt and cousin. Hopefully these places to live will end up being an hour or less from Disney World. And by living closer to Disney World, I’m going to finally get to go to Universal Studios.

Work that sentence out for a second. I’ll wait.

Every time I’ve ever been to Florida, I’ve gone to Disney World (except that one time I was in the state 2 hours total while delivering something, and then was later told we could have driven a little further South and had a mini-vacation, but we didn’t for some unknown reason. Still stings a bit). This is because I couldn’t help being near one of my favorite places in the world and not going. What if I didn’t get a chance again for years and years? The possibility of longterm separation was just too perilous.

Now that I will live close enough to justify a year long pass, that concern is no longer necessary. Which means when we go to Florida, I have no problem spending a few days finally seeing what Universal Studios and Islands of Adventure have to offer. I’ve always wanted to check them out, and now I finally have the chance. That’s a very exciting thought, and gives me a lot to look forward to in the coming months.

Now I just have to figure out how to keep Nicole from running away screaming from the new Harry Potter section of Islands of Adventure. I never did manage to get her to ride It’s a Small World.