The Madness of Buster Bubbles: A DisneyQuest Tale 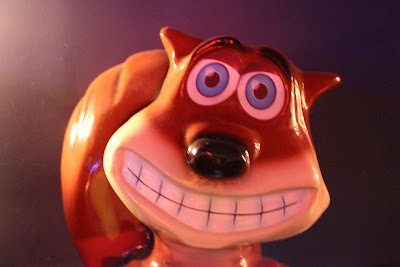 I do not hate tourists.  Without them, Disney World, the attractions, and pretty much anything that isn't swamp or retirement homes in Central Florida wouldn't exist.  I don't begrudge them descending upon the land like a plague of locusts when spring break comes around, because that's logically one of the few times many people can realistically take a vacation.  However, I never want to be locked inside a confined space with a seemingly unending mass of them ever again.  It forced me to face Buster Bubbles, the true face of madness. 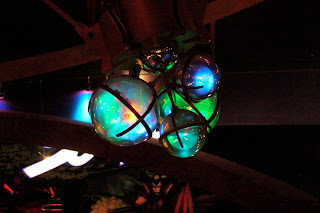 The scene of this particular nightmare was DisneyQuest, Disney's "Indoor Interactive Theme Park," also known as a five story arcade filled with outdated games and simulators.  On a typical day it's only busy once the parks start to close, but on a rainy day during busy season it fills to capacity.  Temporarily forgetting our senses, my wife and I decided to follow the masses and use it to hide from the weather.  This was a one time mistake.

On a good day, DisneyQuest is a flawed experience with a myriad of problems.  It's a flashing, glaring, ear shattering assault of over stimulation, that still manages to be a little dull.  Add a few hundred people per square inch, and claustrophobia ensues while lines form for games one to thirty years old.  While facing this mess, I suddenly discovered that I was hungry.  I can barely tolerate crowds and stifling atmospheres normally, but when I'm hungry it's unbearable.

DisneyQuest has only two small food locations, so my wife and I were forced to wait in a long line just to buy nachos.  The line didn't seem that bad, in truth, except for the fact that every customer took approximately five to ten minutes to complete their order.  It seemed that even after waiting for half an hour, people were still unsure what they wanted to eat.

Even near the food locations, games are tucked into every nook and cranny.  This particular snack stand is near the location of the children's games.  The games in this area would normally sit in a Chuck E. Cheese dispensing tickets, but since all games are set on free play at DisneyQuest, there are no tickets dispensed because there are no prizes to win.  Instead, these arcade machines serve little purpose other than distracting children with attention spans of 15 seconds or less.  It's like the Island of Misfit Toys, neglected machines beat upon and then forgotten by screaming six year olds. 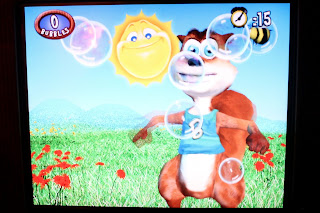 That's the only reason I can think of for the existence of Buster Bubbles, a mechanical punishment seeking vengeance for all the other misfit games.  Two of these machines sat next to the food line, and they turned a long wait into a seemingly eternal torment.  The device was disturbing, a giant fiberglass squirrel with a smile and eyes that would unsettle a serial killer, holding a touchscreen with the actual game.  The game was one of those pointless finger swiping exercises, with the sole goal being to pop as many bubbles in a short amount of time as possible.  The problem was that the game constantly talked, with a cartoon squirrel repeatedly chirping away that we had to "bust bubbles"over and over again. 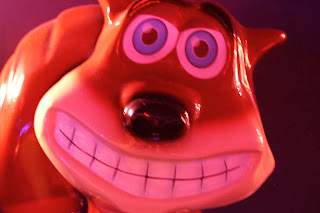 Even though this game was only a few seconds long, it seemed every person that walked by had to play.  Yet few stuck around, simply activating it, grazing the screen with their fingers a few times, then walking away.  This didn't stop the machine from carrying on with the game, however, which meant it never stopped making noise.  As my hunger grew, all I could hear was this squirrel incessantly squealing that I should bust bubbles, bust bubbles!  Combined with the giant, leering grin, it almost seemed like an illicit request.

My frustration grew, and I began to despair that I would never escape this line.  I attempted to endure Buster Bubbles, but this infernal squirrel was wearing my sanity down one bubble at a time.  Finally, I could take it no longer.  I surrendered and retreated to a nearby chair, sitting in the slightly reduced cacophony that passes for quiet inside DisneyQuest.  My wife's nerves held out better than mine, thankfully, and she managed to bring nachos before I passed out in the hard plastic seat. 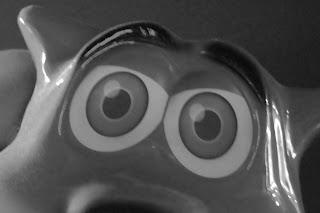 I escaped, but only barely.  I will return to DisneyQuest, but I definitely won't be back when the crowds are there.  Buster Bubbles might be there, and I can't risk being stranded next to him again.  His smile still haunts me, and those eyes continue to stare into my soul.
Posted by Pajama Penguin at 7:01 PM