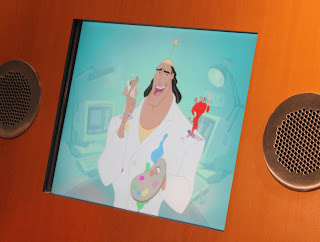 Patrick Warburton is everywhere. This is a natural law of our universe. The amazingly talented and intimidatingly tall actor shows up in more movies and television shows than seems humanly possible. There's a good chance that, somewhere, there's footage of Warburton making a cameo appearance in a movie produced before he was born.

Disney World is not exempt from this universal truth. Patrick Warburton can be found all over the resort, in different times, places, and guises. In the past, he is Incan lunkhead Kronk from the Emperor's New Groove. Kronk hosts a painting tutorial at Hollywood Studio's Magic of Disney Animation. 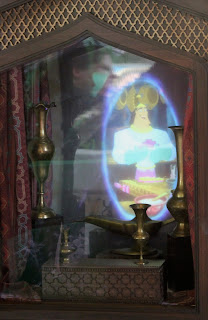 Kronk is also in Magic Kingdom, as a seemingly minor foe in the Socerers of the Magic Kingdom interactive game. It seems like you defeat him during the game, but Warburton only let you win. He cannot be defeated. 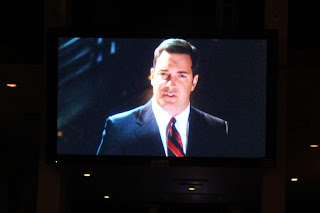 In the present, Patrick Warburton disguises himself as a flight attendant in the pre-show of Soarin' at Epcot. He gives vital safety advice for your journey through the California skies. Your life is in Warburton's hands. 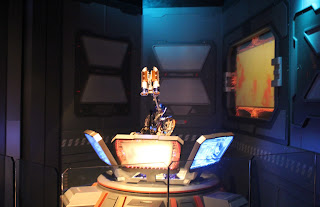 In the future, Patrick Warburton is a security droid, monitoring tourists boarding Star Tours flights. Even with a robotic voice filter, Warburton's deadpan voice can be heard carefully evaluating and insulting tourists and other such insidious passengers. He is always watching you.

The only place I have not found Patrick Warburton's direct influence is Animal Kingdom. However, many of those animals do have rather deep voiced roars, and some of them are squinting a bit. Just to be safe, I should start a petition for the installation of an Emperor's New Groove ride. Warburton is everywhere, and we must accept his power.

Posted by Pajama Penguin at 7:38 AM