Antarctica: Empire of the Penguin Review 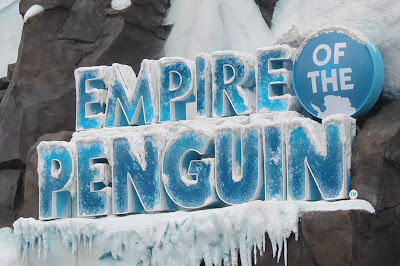 Disclaimer: This is a review of a new penguin focused attraction by someone who named their blog after those amazing aquatic birds. While I'm going to try to give a rational impression, my viewpoint is still tainted by the fact that I'm fascinated and slightly obsessed with penguins. My wife was also still recovering from her recent accident, so our experience was still slightly atypical. Finally, I will be describing the entire ride, so please don't read if you don't want part of the experience spoiled.

For the last year, penguins have been missing from SeaWorld Orlando. Caught in the middle of the theme park war between Universal Studios and Disney, SeaWorld decided it needed a major family attraction to compete. What better way to compete than with penguins, nature's eternally loveable flightless birds? Antarctica: Empire of the Penguin promised to be a revolutionary new penguin habitat, attraction, restaurant and shopping experience. While it may be somewhat a victim of its own hype, the penguins may still save this attraction in the end. 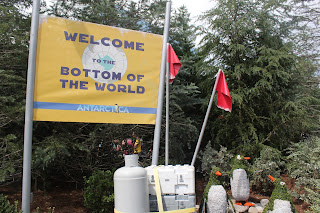 Approaching the new expansion, small theming along the path marks the trail. This display includes some expedition gear and topiary birds. 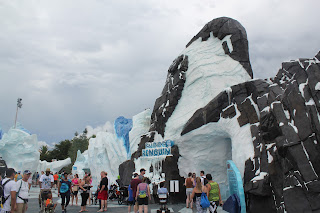 However, this extra signage is just a nice touch, because the giant penguin-shaped mountain is hard to miss. The faux snow covered rocks surround the entire expansion. Fittingly enough, the ride and animal habitat are housed underneath the main mountain, with the shop and food offerings located directly across from it.

The queue is surprisingly located entirely outside. Thankfully, umbrellas and fans are located alongside the path, as well as some stations with penguin facts. It's not the most interesting line, but at least the hot Florida sun has been given some consideration. 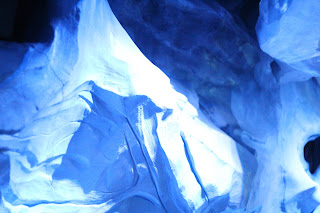 The outside queue ends inside with a short introductory film. Standing in an icy cave, you watch as the ride's mascot, Puck, is hatched and first emerges into the world. You're then ushered into a short indoor line, where you decide whether you want the Mild or Wild version of the attraction. Unless a member of your group is especially young or prone to motion sickness, choose the Wild experience. The Mild version is extremely slow and gentle, while the extra spins and motion of the Wild experience would be considered rather tame by most theme park standards. 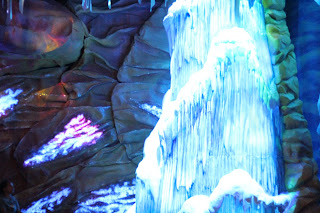 The ride is a trackless dark ride, with vehicles that move freely around the environments. While the technology has made some appearances overseas, it's seen little to no use in the United States. It's a spectacular concept, and Empire of the Penguin tries to add its own twist by including motion simulation. Sea World definitely made a noble effort, but it seems ambition may have gotten the better of them.

Following the penguin Puck through his development, the attraction starts by navigating and dancing around rooms of glowing ice, volcanic vents and other ride vehicles. Wild vehicles spin while Mild vehicles gently observe the surroundings. Next are two simulation rooms, where ride vehicles follow the motions of two films of Puck's journeys, including a harrowing underwater chase by a predator. 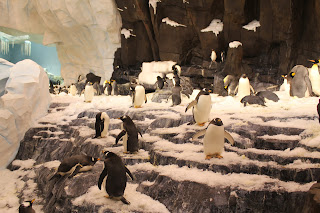 Puck escapes, and the vehicles turn towards a large wall, which suddenly opens to reveal real penguins, calmly ignoring all of the theme park weirdness surrounding them. In truth, the ride part of the attraction is a bit short, and the emphasis on video sections is a little underwhelming. The trackless ride technology is not used to its full potential, resulting in a decent family attraction. However, I think the spectacular penguin habitat that awaits at the end is the real focus of this experience, and definitely worth the wait.

Other than the penguins themselves, the first thing you'll notice is the temperature. The habitat is kept at a constant 32° Fahrenheit, with the lights often dimmed to replicate the day/night cycle in Antarctica. Employees wear parkas, but guests are left to watch the penguins in their shorts and t-shirts. Floridians flee this part of the attraction rather quickly, which is unfortunate. The freezing temperatures are a massive relief on a Florida summer day, and withstanding the cold is worth this close of a look. 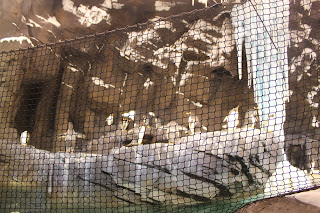 This is a habitat that is open to guests, to the point where temporary nets have been added to deter the penguins. Apparently, some of the more curious creatures were hopping out of the exhibit to explore among the guests. Hopefully the rebellious birds will calm down enough that these nets can be removed, though much of the area still provides an unobstructed view. 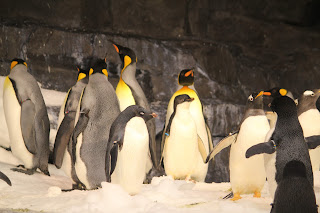 For someone who loves penguins, this is a very chilly heaven. Four distinct species of penguin mingle in this exhibit, providing constant antics. There is a staggering number of birds in this large habitat, and there is almost always something to see. 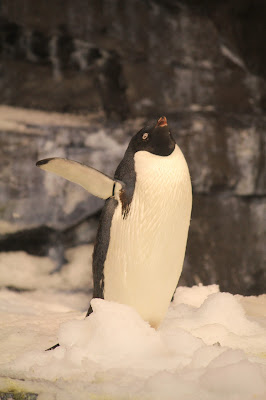 Adelies are the cuddliest of the penguins on display, with a rounded shape and small eyes set low in their head. 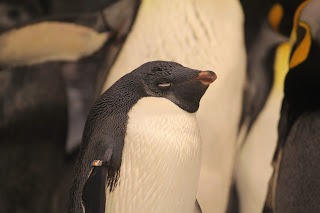 If you can watch one of these little creatures sleep and not want to hug it, you may need psychological help. 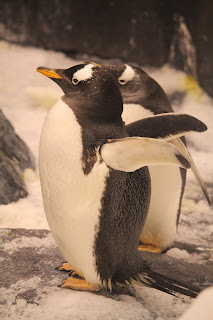 Gentoos are the most stereotypical penguins, with the classic tuxedo appearance and simultaneously sleek yet awkward forms. 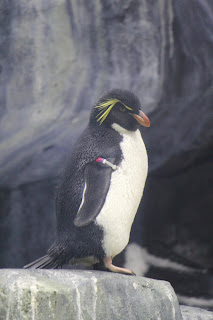 Rockhoppers are famous for their vertical mobility and their unique appearance, featuring a striking yellow crest that gives these penguins a perpetually annoyed expression. 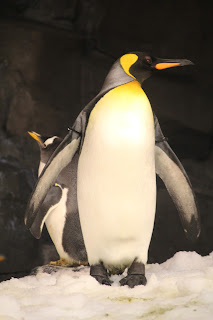 Finally, King Penguins tower above all the rest. The second largest species behind only Emperor Penguins, these surprisingly large birds peacefully coexist with their smaller brethren.

Penguins may not be able to fly, but they are excellent swimmers. While you can view some swimming from within the habitat, the best spot to see the penguins glide through the water is immediately outside. Within an air conditioned, but no longer freezing, room is a giant glass wall with a perfect underwater view. This is an amazing way to see these creatures at their most graceful, moving so fast through the water that it's nearly impossible to follow their movement. 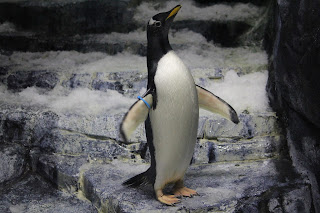 There's even a small viewing area to see the penguins on land, for those less hearty folks that have no tolerance for the cold. This gentoo penguin seemed particularly interested in showing off for the crowd. 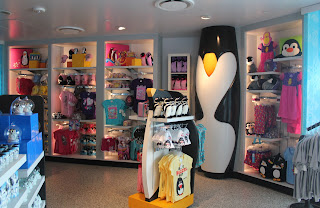 Of course, no new theme park attraction can be without a gift shop. This nicely themed spot includes one of the most spectacular selections of penguin related merchandise I've ever seen. I'm still trying to convince my wife we should replace everything in our kitchen with penguin themed items. 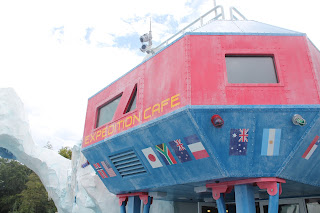 There's also Coca Cola Freestyle drink station and a new quick-service restaurant. Unfortunately, due to time constraints I was not able to visit the new eatery, but it seems that there's no eating with the penguins or any such interesting gimmicks.

Overall, I'd say Antarctica: Empire of the Penguin is a worthy addition to Sea World. It's a spectacular animal habitat with a decent ride as an introduction. My biggest complaint is that there is no way to skip the ride and directly visit the penguins. For those not interested in penguins, this attraction will not have as much appeal. I will definitely visit again and again, though possibly with a jacket next time.
Posted by Pajama Penguin at 6:38 AM